As they wait for the Red Heifer that was born in August of 2018 in the Golan to be “ready”, a yeshiva student accidentally found a kosher red heifer in Colombia. They claim it has been bought and is ready to be burnt for their “messiah”. I know in this case, if this is the red heifer that is burnt then it is a play of Colombia with an O and Columbia with a U. As in District of Columbia. Before we get to the actual red heifer article, let’s look at the symbolism here. 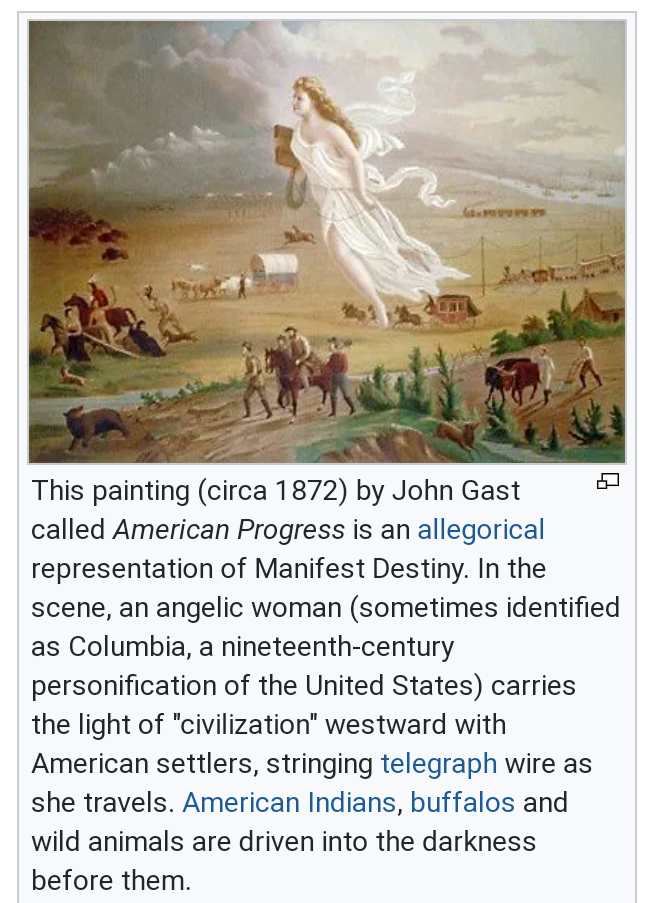 The word “Colombia” is named after Christopher Columbus which Columbus (with a U) is the Anglicized name of Colón. “Colon,” in terms of the intestines, comes through Latin from the Greek word Kolon. It meant “large intestine, or food, or meat.”

Others say the etymology of Christopher Columbus’ surname is from Latin columbus: a male dove, or cock-pigeon. Anyway you look at it, Columbia or Colombia comes from Columbus and it represented the goddess of liberty ie Lady Liberty.

Look at the coast of arms of Colombia and notice the two cornucopia’s and a Red Phrygian cap coming out of the water with a condor on top. The coat of arms actually says “Liberty and Order” on it. This is all tied into the goddess Columbia whether Colombians want to admit it. 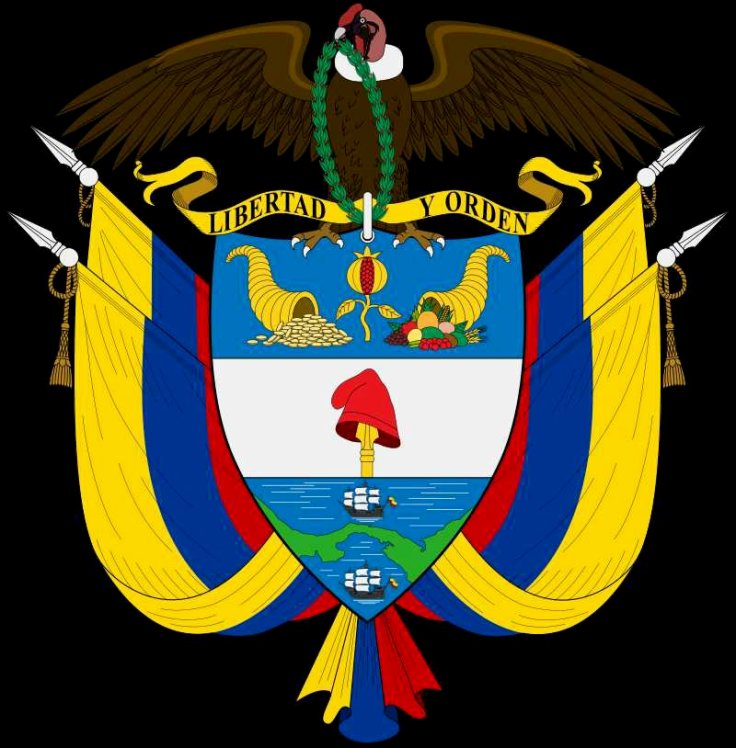 In early images of Columbia, she often held a parrot, was seated on a caiman or alligator, with a cornucopia. Ironically, in some images she has a reddish blonde hair color.

If this is the red heifer to be burnt and it is from Colombia, you do know Israel has another red “heifer” that they support in District of Columbia by the name of Donald Trump. Notice below that Libertatas is killing a bull with her Phrygian red cap on.

““The sacrificer in the sculptured group of the “Mithraic Sacrifice,” among the marbles in the British Museum, has a Phrygian cap on his head, whilst in the act of striking the Bull with the poniard—meaning the office of the immolating priest.” 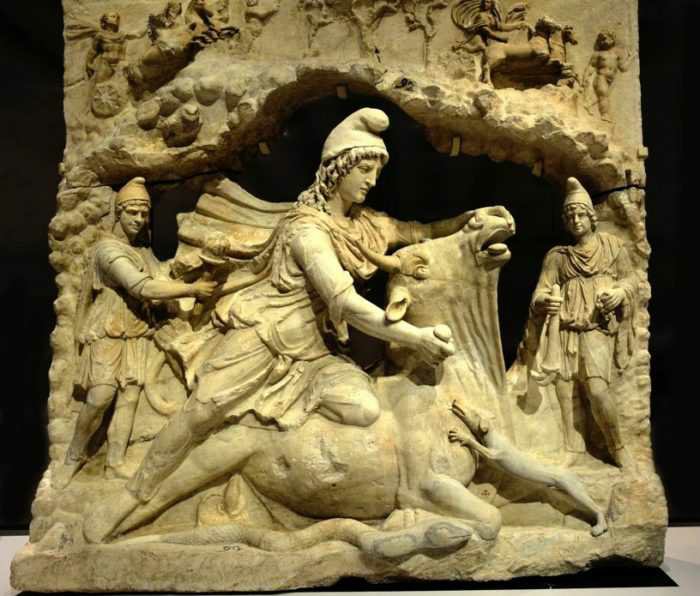 This comes from the Gnostic Warrior. “The Red Cap of Liberty is also known as the Phrygian Cap, Mithraic Cap, sacrificial Cap, mitre and in French as the bonnet de laLiberté or bonnet rouge. It symbolizes the sacred acts of Initiation, Sacrifice, Liberty, Revolution, Enlightenment, and Brotherhood…The red cap not only an ancient symbol, it is one of the oldest magical talismans that is still in use to this very day by various religions, secret societies, and governments all around the world. British Freemason and Rosicrucian, Hargrave Jennings had written, “The Phrygian Cap, the classic Mithraic Cap, sacrificial Cap, and mitre all derive from one common ancestor.”

He continues, The whole is a sign of “initiation,” and of baptism of a peculiar kind. The Phrygian cap, ever after this first inauguration, has stood as the sign of the “Enlightened.” The heroic figures in most Gnostic Gems, which we give in our illustrations, have caps of this kind.” (https://gnosticwarrior.com/red-cap-of-liberty.html)

The Phrygian Cap has “became the iconic symbol of freedom with the phrase “servos ad pileum vocare” to call the slaves to the Pileus (or cap).” Remember the red cap of “freedom that has driven some people to insanity? MAGA red hat.

Now on to the article.

“An ultra-Orthodox Israeli student now living in Colombia said that he spotted a kosher red heifer on Wednesday that would be available immediately upon the coming of the Messiah reports Radio 2000. The man took footage of the animal, and claims that halakhic (Jewish legal) authorities have confirmed that at first glance, it is indeed kosher.

The student purchased the cow for an undisclosed but “large” sum of money.” (https://www.israel365news.com/158710/a-red-heifer-was-accidentally-discovered-in-colombia-watch)

So if this red heifer is used, we have a strange parallel to the cult of Mithras and a connection to their divine feminine, in this case called Liberty. And let’s not forget about Trump invoking the red headed Sophia at his inauguration. Sophia is the feminine aspect of Lucifer in the celestial sphere. It will be interesting to see if they burn the Colombian red heifer.

You can read more about this red cap: https://hyperallergic.com/436182/before-maga-mithras-phrygian-caps-and-the-politics-of-headwear/

I want to point out the article from Bogota. I think it is funny that they had an ad for the vaccine above the story. I have mentioned before that this red heifer is their “ultimate” vaccine.

This is just a reminder where the word vaccine comes from.

The word vaccine is derived from the Latin word vacca for “cow”.

“Bull/cow worship has been around since the great debacle at Creation. Enoch even used bulls and heifers in the story of Adam/Eve/Abel/Cain. With the rise of bull worship around the world and the coming red heifer abomination, should we be surprised to know the word vaccine comes
from vacca (cow)? This should better help explain the importance of bulls/cows/heifer worship to these people and that a vaccination is nothing more than a ritual. The ritual to keep your immune system unhealthy and hopefully eventually kill us all.” (https://hiddeninthecrag.com/2019/04/06/vaccinations-just-another-bull-heifer-cow-ritual/)

“The vaccine is derived from the word vaccinia, meaning the so-called cowpox – a disease known to have the world’s first vaccine as early as the end of the 18th century.

One of the Egyptian runs: … they become finely powdered all over the land of Egypt, and there are ten Egyptian moments on the lid of the sore, blistering. (Exodus 9.9)” (Lukas Kosut)

Essentially all vaccines and viruses are man made in our modern day and correspond with PHARMAKEIA.

The Temple Institute came out three days later and commented on this Colombian red heifer.

An avrech (Jewish Torah scholar/teacher) in the country of Colombia reported that he was called upon by a local farmer to check a recently born perfectly red calf. The avrech inspected the calf, declared it to be a perfectly fit red heifer and purchased it. The auspicious timing of the calf’s appearance on the days between Rosh HaShana and Yom Kippur, has been noted. In the meantime, the Temple Institute continues its efforts to raise a red heifer here in the land of Israel.

I do find the irony in the comment above. Could you imagine them rejecting a pure red heifer for their generically modified red heifers?