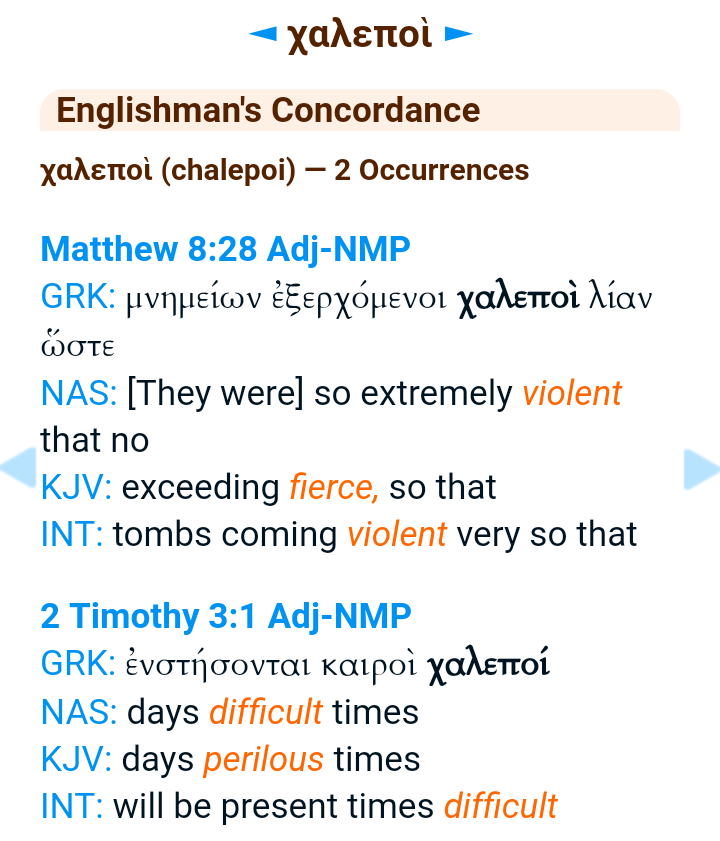 2 Timothy 3:1 This know also, that in the last days perilous (chalepoi, χαλεποί) times shall come.

Matthew 8: 28-31 And when he was come to the other side into the country of the Gergesenes, there met him two possessed with devils, coming out of the tombs, exceeding fierce (chalepoi, χαλεποί), so that no man might pass by that way. And, behold, they cried out, saying, What have we to do with thee, Jesus, thou Son of God? art thou come hither to torment us before the time? And there was a good way off from them an herd of many swine feeding. So the devils besought him, saying, If thou cast us out, suffer us to go away into the herd of swine.

So isn’t it strange that the word chalepoi (χαλεποί) is used here and it is only used one other time in scripture. 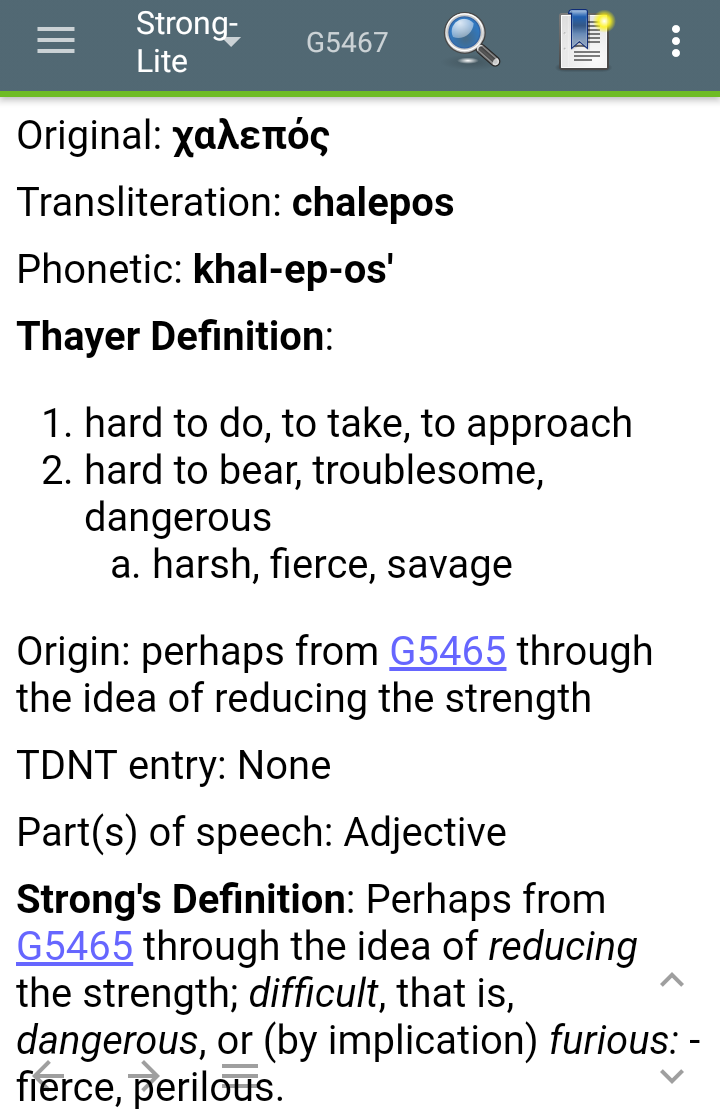 Perilous or chalepoi is used in Matthew when Jesus encounters the 2 men possessed with devils/demons who beg Jesus to not “torment” them and to put them in that herd of swine that was used for sacrifices in the temples of Zeus (Jupiter) so they can drown in the water. Ironically this word chalepoi comes from chalaō which means to lower into a void.

Chalaō comes from chasma – a gaping hole or chasm or a gulf. This word chasma is used in Luke 16:26 in the parable of Lazarus and the rich man. The gulf that seperates Paradise and Abraham from Sheol on the otherside is this chasma.

So doing a little connecting the dots, you have 2 demon possessed men that are a representation of perlious times in the last days that leads us to what sounds a lot like an abyss or bottomless pit. And what comes out of the pit? Locusts/demons that torment the earth dwellers. Is there any correlation here to what we will see in the perilous times of these last days?

Some people stand for the truth and proclaim it from rooftops, while others sit on the TRUTH to shut it up.

Pilate asked “What is truth?” even after Jesus just explained to him. Maybe Pilate should have came at Jesus like Nicodemus did and then he would’ve understood better. But Pilate in my eyes was being condescending, like our modern day “truther” cult. How many “truthers” claim to be “woke”, “awake” and “conscious” but are literally so asleep spiritually that they are spiritually DEAD. How many “truthers” claim truth but reject Jesus as their Lord and Saviour. Are the really TRUTHERS? You see, Pilate was a “truther” but didn’t know the TRUTH even when he was looking at Him face to face. Jesus is the TRUTH AND THE WAY AND THE LIFE. There are two truths in this world. The truth that the world wants you to know and the TRUTH that they reject.

John 18:36-38 Jesus answered, “My kingdom is not of this world. If My kingdom were of this world, My servants would fight, so that I might not be delivered to the Jews; but now My kingdom is not from here.” Pilate therefore said to Him, “Are You a king then?” Jesus answered, “You say rightly that I am a king. For this reason I have been born, and for this reason I have come into the world, that I should testify to the truth. Everyone who is of the truth hears My voice.” Pilate said to Him, “What is truth?” And having said this, he went out again to the Jews, and said to them, “I find no fault in Him.