What is the connection to the Arch of Triumph in Palmyra to the United States? Scholars have for years connected the etymology of America to Amurru. Amurru is nothing more than the Amorites and the Amorites worshipped Marduk. Linguistically these names are all related. Marduk was Satan and according to Europeans who worship Marduk, this is nothing more than Zeus aka Jupiter. We already know Jupiter worship is prevelant in America, not only with the government but within churches who in fact hold more esteem for Jupiter Serapis than the real Jesus. We see this with them recognizing the long haired hippy Jesus of Catholicism. 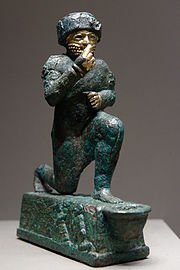 But what’s the connection to America and this Arch from Palmyra? Palmyra was called the land of Amurru at one time. Did you know that? In Syria they in fact worshipped not only Ba’al in every form but also worshipped Zeus (Jupiter). Remember Antiochus Epiphanies? He slaughtered that pig in the Holy of Holies in honor of Zeus. America is Amurru worship and their is a reason as to why we have seen the Arch of a Triumph in New York and D.C. This is the land of Amurru and this is why the US is so invested wth staying in Syria. This is their brother land. Amurru was also called the gate of the West and the god itself was associated with the sky, mountains and thunderbolts. Amurru’s wife is usually the goddess Ašratum (see Asherah) who in northwest Semitic tradition and Hittite tradition appears as wife of the god Ēl which suggests that Amurru may indeed have been a variation of that god. Another tradition about Amurru’s wife (or one of Amurru’s wives) gives her name as Belit-Sheri, ‘Lady of the Desert’. Also keep in mind Palmyra was called Bride of the Desert for this very reason. Now you can understand better why I put a priestess of Isis under the Arch on the cover of my book. Not only is this Arch being used by invoking the demonic divine feminine, it is bringing about Zeus or in Americaa case, Jupiter. To better grasp this you need to go through my last 2 books.

I suggest you research this to decide for yourselves but I’ll give you a little taste of what’s going on here. This is according to the Jewish Encyclopedia. “During the Aramaic invasion at the end of the second millennium, Tadmor, being the key point of connection between east and west and north and south, was one of the chief sites of clashes between King Tiglath-Pileser I of Assyria and the nomadic Aḥlamû-Arameans: “On the territory which extends from the feet of the Lebanon mountain to the city of Tadmar (!) of the land of Amurru, [to] the [city of] Anat [on the Euphrates] of the land of Suḥi, and to the city of Rapiqu [on the Euphrates] of the land of Karduniaš [= Babylon] I defeated them decisively” (Annals, lines 31ff.; Weidner, in bibl.).

From this inscription it can be learned that Tadmor belonged to Amurru, which here means not simply the “West” but is connected in some way to the (by then dissolved) state of Amurru, founded by the dynasty of Abdasrita in the 14th century (see *El-Amarna Tablets and *Amorites). This territory was inherited by the Arameans.” (https://www.jewishvirtuallibrary.org/tadmor)