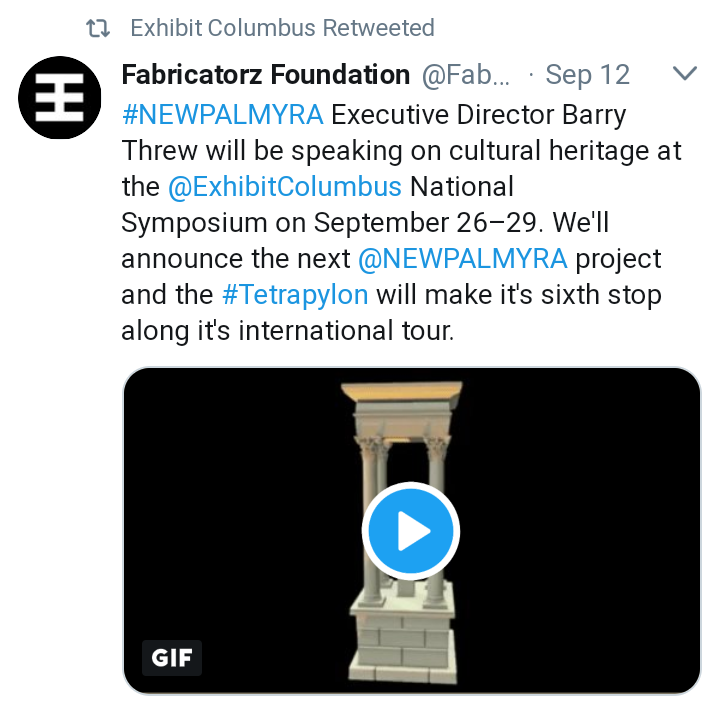 Coinciding with the Arch of Triumph going up in Washington D.C.(District of Columbia) in the last few days of Sukkot (Feast of Tabernacles) and the blackening of the St. Louis gateway arch, there is another gateway called a Palmyras Tetrapylon going up in Columbus, Indiana through the 26th – 29th of September. Columbus, Indiana has been called mid-century modern architectures “Mecca” and this will be its 6th international stop. 6?

I first want you to notice that Columbia and Columbus are very close linguisticaly. “Columbia is a New Latin toponym, in use since the 1730s, for the Thirteen Colonies. It originated from the name of Italian explorer Christopher Columbus and from the ending -ia, common in Latin names of countries (paralleling Britannia, Gallia etc.)…Images of the Statue of Liberty largely displaced personified Columbia as the female symbol of the U.S. by around 1920. (https://en.m.wikipedia.org/wiki/Columbia_(name) “Massachusetts Chief Justice Samuel Sewall used the name Columbina (not Columbia) for the New World in 1697.[4] The name Columbia for “America” first appeared in 1738″ (https://en.m.wikipedia.org/wiki/Columbia_(name) Columbia is nothing more than thier goddess Isis, or maybe that’s Sophia. 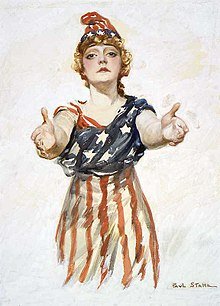 Columbus means “diver or I dive” in the sense of fishing in some cases. This reminds of fisher of men for the harvest. A Columbus is also a term used for a male dove and Columbina, where both of these words originate from means a female dove. They are calling the Arch of Triumph now the Arch of Peace, so to see the dove connection to these city’s where all of this is taking place is not surprising. They are really pushing for that false peace. Not only the name connections here but in order to get from the Gateway Arch in St. Louis you need to go through Columbus, Indiana, Columbus, Ohio which takes you to the District of Columbia. All just coincidence right? 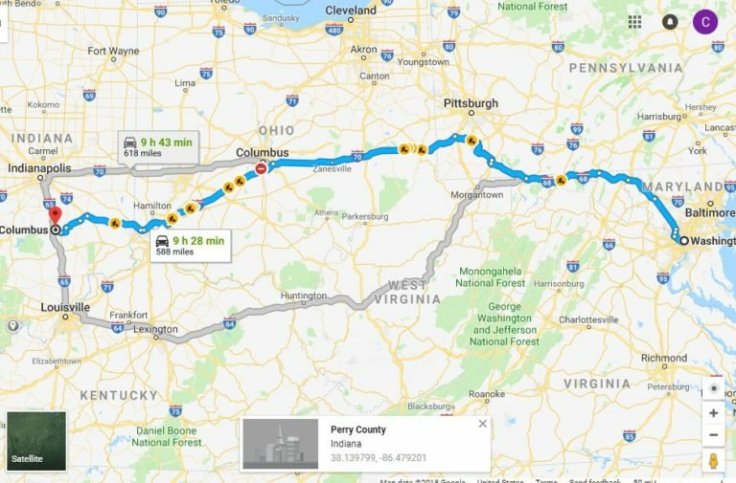 Now what is this 7.5 foot replica of a tetrapylon from Palmyra they are putting up in Columbus all about? “A tetrapylon (Greek: τετράπυλον, “four gates”), plural tetrapyla, known in Latin as a “quadrifrons” (literally “four fronts”), is a type of ancient Roman monument of cubic shape, with a gate on each of the four sides: generally it was built on a crossroads. It was a type of monument common to the architectural vernacular of classical antiquity. The defining quality of this form is the concept of four gates, with four pillars or other supporting structures placed at the corners marking the divisions between them. A tetrapylon could take the form of a single building or multiple, separate structures. They were built as landmarks at significant crossroads or geographical ‘focal points’, as a ‘sub-type’ of the Roman triumphal arch, or simply as decorative and aesthetically pleasing ornamental architecture. As applied to a triumphal arch (e.g., the Mausoleum of the Julii at Glanum, Arch of Janus, Rutupiae), a tetrapylon was effectively a ‘doubling’ of the original form; with a total of four major arched openings, one on each side of the structure (one pair of openings opposite each other along one axis, and a second pair of openings of equal or lesser prominence perpendicular to the first pair; hence a structure with two barrel vaulted passageways, in the form of a cross).” (https://en.m.wikipedia.org/wiki/Tetrapylon)

So this tetrapylon is a cubed gateway with actually 4 gateways facing each cardinal direction. It is associated with the Roman Triumphal Arches and this would include Palmyras Arch of Triumph. It is interesting that both of these will be up on the same day that are 9 hours and 16 minutes apart. I bet you can make it in 9 hours and 11 minutes if you drove fast enough. 👍

It was also built on a crossroads that was to be a geographical focal point. It seems in this country, we too are at a croosroads, whom will you serve? In the end, all of these pagam sites will come down. 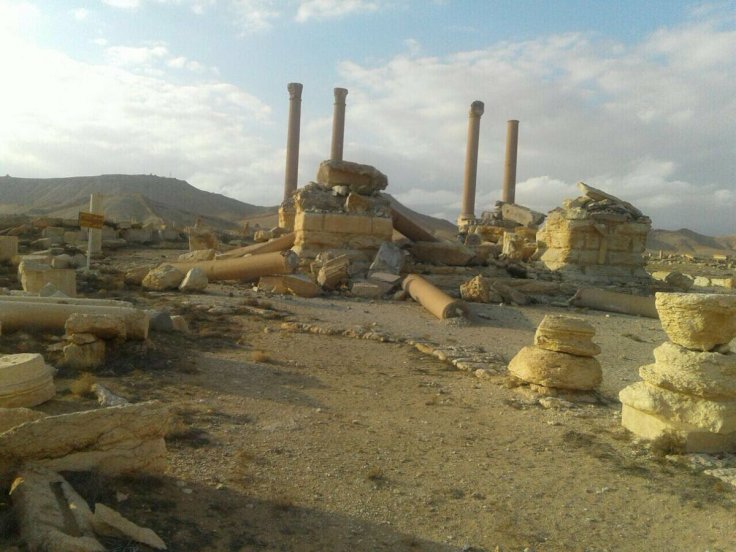 One last thing, I mentioned that its on a international tour and Columbus just so happens to be on its 6th stop. It was in San Francisco from July 28th to August 3rd featured with a block chain computer. 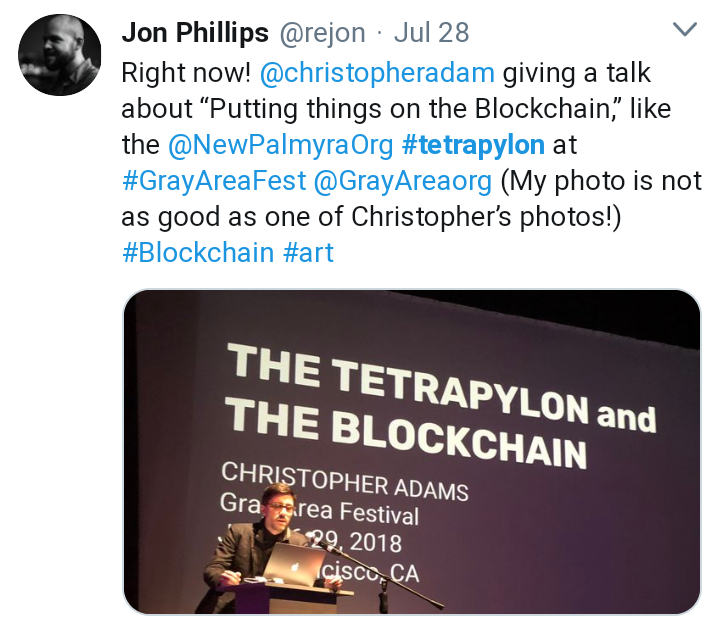 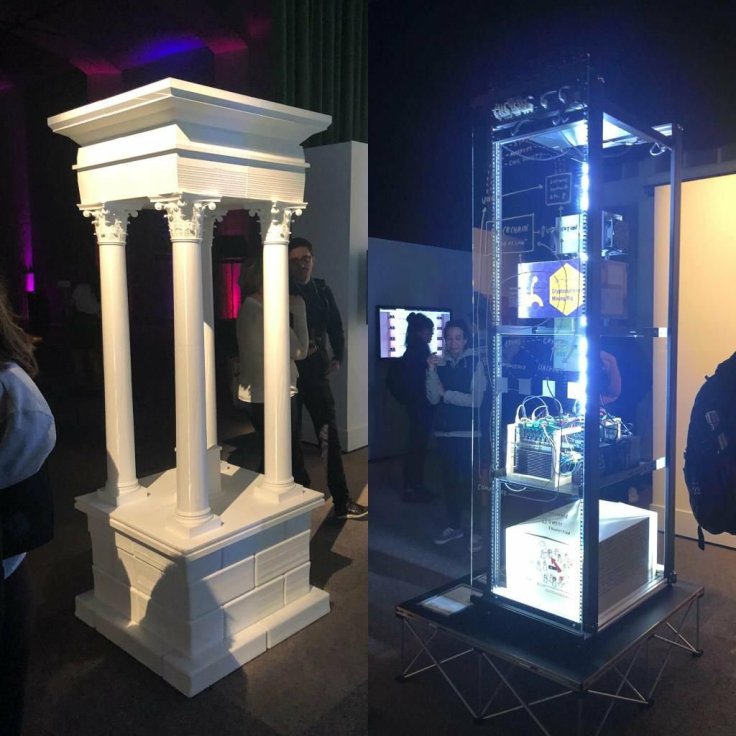 One thought on “The Columbus Gateway During Sukkot”