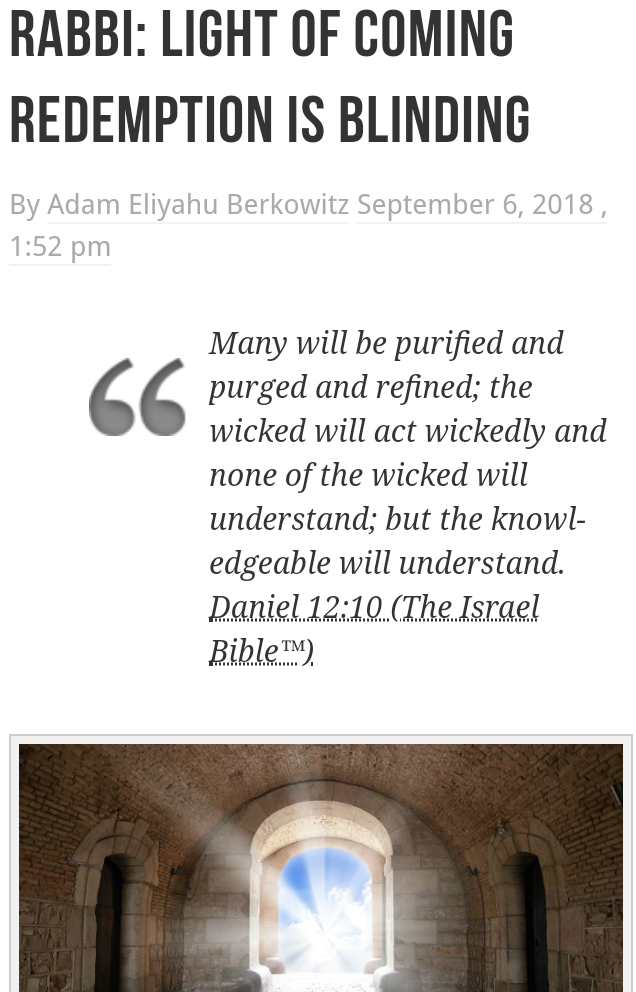 Here is some Vilna Gaon eschatology for you. They are claiming 9-13 years for their “messiah”. I like how the article says the “light of coming redemption is blinding”. Oh yeah, they are blinded alright, especially by guys like Vilna Gaon. I also thought the light coming through the Arch was a nice touch too.

“According to the Vilna Gaon, the Messiah will be a two-stage process. The first stage, Messiah from the house of Joseph, is a practical, mundane process of returning the exiles, the beginnings of the Third Temple, reestablishing the Davidic Dynasty, and building up the land of Israel. This is a social movement and though there may be outstanding figures, that stage of the Messiah will not be embodied in a single individual. The second stage, Messiah from the house of David, transcends nature and will be embodied in a single person.

“The Gaon wrote that tchiyat hametim (resurrection of the dead) will take place 210-214 years before the year 6000. That means that tchiyat hametim could begin in nine to thirteen years. What is significant about that is that when it begins, it means that the messiah has already come and gone. His work is already done and the next stage is beginning. God is bringing back the dead to prepare them for the world-to-come. This is a lengthy process and won’t happen overnight.” “That being said, it means that Moshiach must come sometime within the next nine years.” (https://www.breakingisraelnews.com/113577/light-coming-redemption-blinding/)