Just a few quick thoughts on the movie The Nun.

Duality once again. This time a white/black witch scenario. In reality both are evil, but Hollywood tends to distort reality. In this movie The Nun, Valak posseses a Nun. In mythology Valak is a demon boy with wings who rides a two headed dragon, similar to what we see in pop culture as a cherbium. In the Book the Lesser Key of Solomon Valak is called the Grand President of Hell, gives answers to hidden secrets and is associated with serpents/snakes. This demon was never associated with a nun per say but goes well with Hollywood’s lies. Valak the nun is represented as a Satan type character.

The “sister” is named Irene. She is the other side of this false Hollywood coin of “good versus evil”. Now here is what is interesting. While researching for my book on the Arch of Triumph in Palmyra there was an association there with the letter Nun. Nun represents the snake and whale. If you have been reading all my research the last few years then you can see where this is going. Nun is also a variation of the name Nimrod and there was a group called the Sisters of Nun. This is where you get the nuns of the Catholic church. Everything always comes full circle.

So Irene who is the hero of the story also has a connection to the Arch. Her name comes from Eirene who was the goddess of peace and just another form of the goddess Isis. In the movie The Nun, Valak is realeased from its prison which is actually full of water. Go back and read what I wrote about yesterday and the parallel dimensions/portal water connection. So yeah, the demon Valak comes from the water and gets put back in the water in the end but not before it possesses Maurice (whose name means soldier) through a snake coming out of its mouth and overtaking him.

Anyways, Irene or Isis for arguments sake, defeats Valak with some alleged blood of “Jesus” that was in a glass egg (think Ogdoad story). Upon defeating Valak, Irene is seen as a hero while laying under a Arch with a light shining through it. In my book I claim the replica of the Arch of Triumph was conjouring and invoking their demonic divine feminine and The Nun proved my point. You can read all about this symbolism in the book for free here. It ends with the one eyed symbolism with the Priest. His left eye had something (a crucifix) go into it and they had to bandage it up. It ended with the all seeing eye symbolism.

Side note: now you know why Marilyn Manson looks the way he does and wth is in control of him. The great President of Hell. 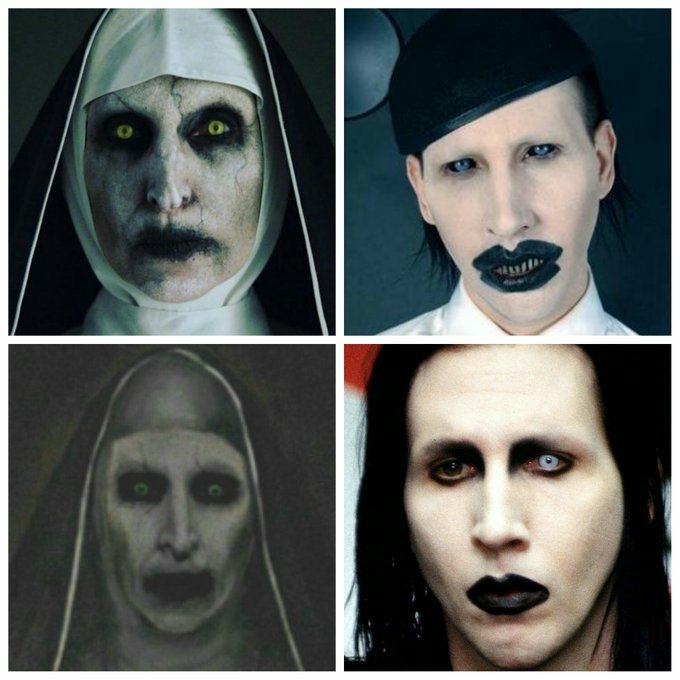