I can actually say that I didn’t think I could dislike soccer more than I already do…but…I can. Where did “football” or what we call Soocer in America originate avid what does it mean? Is there an occult meaning behind it? Let’s first look at what recently took place in Jordan.

One Ball, One World.

“A football travelling across the world to highlight the role of football in helping displaced people find a new home and build new communities on Saturday arrived in Jordan, for a six-day stopover as part of the “One Ball, One World” initiative.

“After being welcomed on board by the captain who signed it, The Ball just landed in Jordan where it encountered the friendliest customs officials ever,” rejoiced the project’s organisers Spirit of Football, posting selfies of The Ball with airport officials.“ 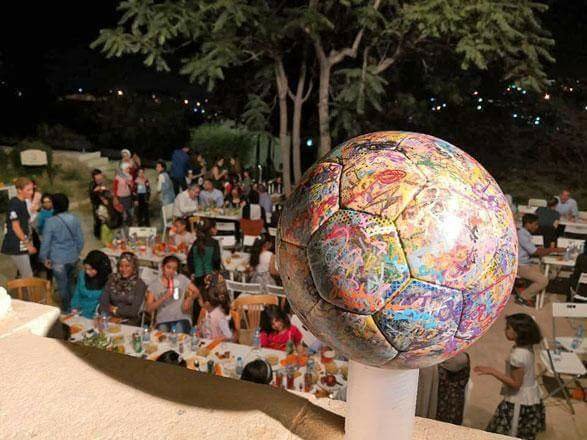 “The Ball went on to be part of an Iftar (fast breaking meal) gathering members of the German embassy in Amman and CARE international, who celebrated “the power of The Ball in connecting all kinds of people and spreading the love, respect, community and a special spirit of connectivity”, in partnership with the organising partner Equal Playing Field (EPF).

“From its founding moment, football was based on the notions of inclusion and participation. The initiative of Spirit of Football and EPF is following and intensifying this tradition,” said cultural attaché at the German embassy Jaime Sperberg, adding “football stands for playing together, for trying to win without harming the other from the opposite team. Football also stands for a peaceful world with generally accepted rules, which is the foundation of every society.” (http://www.jordantimes.com/news/local/world-cup-ball-brings-spirit-football-jordan)

Where Soccer Came From

“The Freemasons Arms, in Covent Garden, claims a unique place in soccer history – that it was here in 1863 that the Football Association was founded. This claim is debatible as some sources claim the Football Association was founded in the Freemasons Tavern – where now the Grand Connaught Rooms (a conference centre) is located – at 61-65 Great Queen Street.” (https://londonunveiled.com/2012/06/29/the-freemasons-arms/) 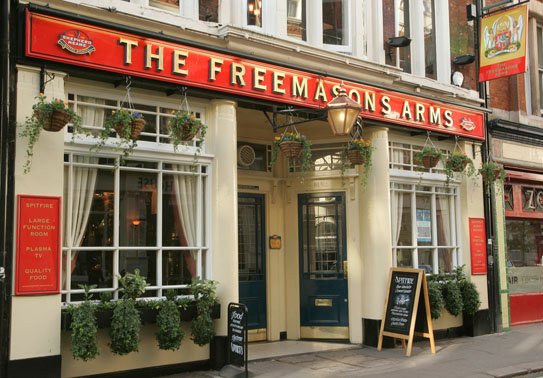 “Association football was born in 1863 at the Freemason’s Arms Pubnear London’s Covent Garden, at 81-82 Long Acre. Six meetings were held at the pub to decide on rules and structure, and the meetings ended with a split between the new Football Association (“soccer” is said to be a truncated version of “association”) and the proponents of different rules that became rugby.
The Freemason’s Arms pub was built in 1860 and is still open today. It began life as the Freemason’s Tavern, which originally stood where the United Grand Lodge of England’s New Connaught Rooms are today on Great Queen Street. London’s Freemasons’ Hall is literally right across the street.” (http://freemasonsfordummies.blogspot.in/2010/06/soccers-masonic-birthplace.html?m=1) 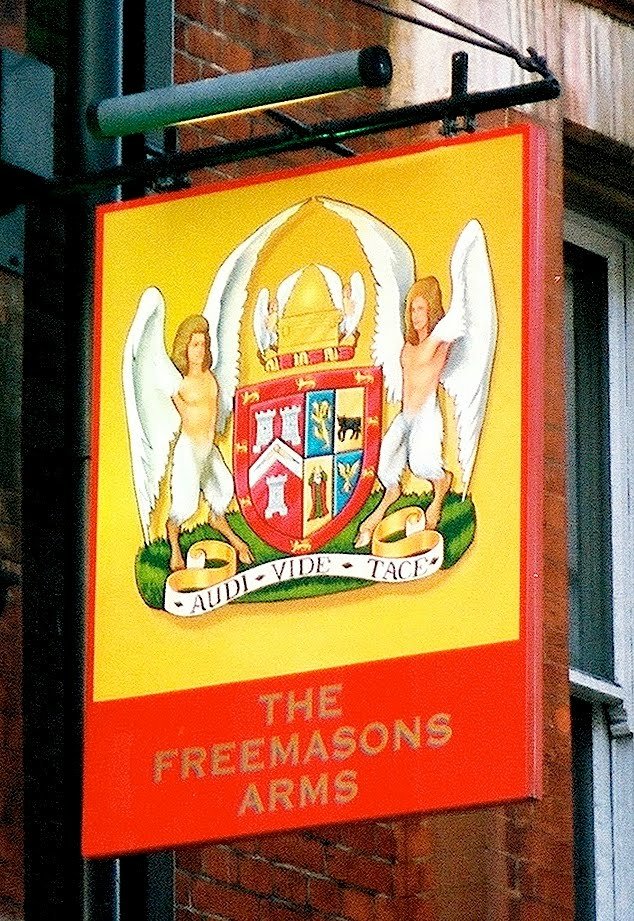 “Over the door are the Latin words “Audi, Vide, Tace“ which are generally translated as “Hear, see, be silent”. These comes from a longer Latin saying, “Audi, vide, tace, si vis vivere in pace” which is generally translated as “Hear, see, be silent, if you would live in peace.” The three Latin words remain in the Coat of Arms of the United Grand Lodge of England (shown below)” (https://www.myfreemasonry.com/threads/audi-vide-tace.26288/)

Notice the Pan like “Cherebum” on birth sides of the Ark of the Covenant and the 4 beasts from Revelation. The birth of Soccer.

Freemasons Utd! Soccer stars to get their own lodge where they can perform Masonic rituals

“This week, the organisation’s Grand Master, the Duke of Kent, is set to grant a warrant for the first Football Lodge – a place where members meet – in Hampshire.

Players, managers and referees who are Masons will gather four times a year to listen to guest lecturers from the world of football as well as perform a series of Masonic rituals, though the organisation claims that many of the stereotypes, such as secret handshakes, are false.”

Soccer in the Talmud

We can learn a lesson from football, or “soccer” as they call it in USA.

The Talmud Yerushalmi (Avodah Zorah 3:1) tells us that an eagle carried Alexander the Great into the heavens. From there, the world looked to him like a ball. Similarly, the Zohar (3:10) comments “the entire world revolves in a circle like a ball.”

In soccer, the intent of the game is to propel the ball through a gate. Hence, the ball, that is, the world, has been given to every Jew with a similar intent. The Mishnah comments: “Each individual is obligated to say ‘For my sake the world was created.’ “The world is given to each individual with the purpose that he bring it through the “gates of the king,” despite the many obstacles and difficulties that must be overcome.

In soccer, the opposing team tries to prevent the scoring of a goal by the players. At the same time, they try to put the ball through the opposing players’ goal, “the opening of Gehinom.” So it is in our lives: the obstacles and challenges we encounter must arouse in us the attribute of victory, a quality that activates the essence of the soul.

In soccer, the presence of the opposing team causes a player to run and to jump – not to be content with slow, step by step, progression. Also, the game is won through the efforts of the feet, symbolic of deed and action, rather than the head. Certainly, the game must be played with thought. Nevertheless, the most important aspect is deed and action. Similarly, in our service there are parallels to these concepts.

The remarks are not intended to take a person away from his studies and cause him to go out and play ball. However, since there are children who, as of yet, do not fully appreciate the preciousness of Torah and want to play ball, they should be able to do so “for the sake of Heaven.” By “educating a child according to his way,” that is, taking something like soccer, which he enjoys, and showing him how it can be done “for the sake of Heaven,” we ensure that “even when he grows older he will not depart from it.”
(The Lubavitcher Rebbe)

From “Hasidim in Israel” by Tzvi Rabinowicz ( Aronson)(http://ascentofsafed.com/cgi-bin/ascent.cgi?Name=soccer-talmud)

This comes from Matthias Piechaczek. “Soccer is the principle of the kabbalistic tree of life. 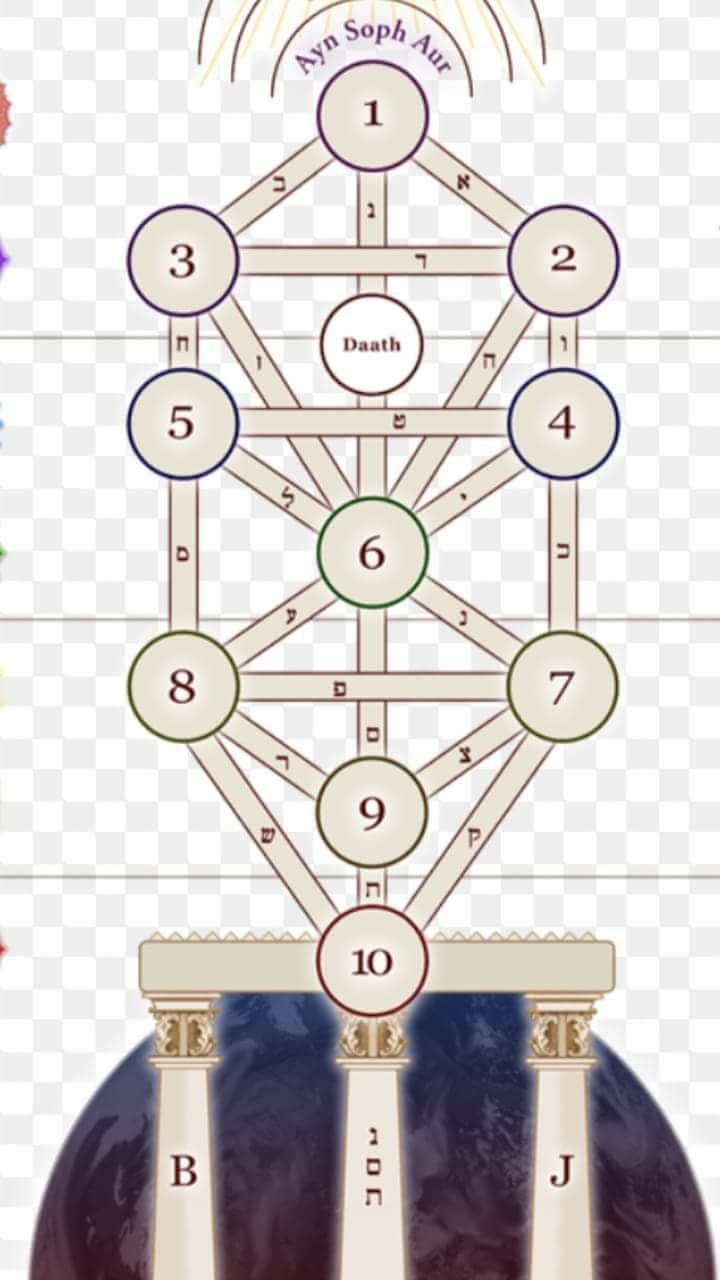 It’s explained in the Talmud. 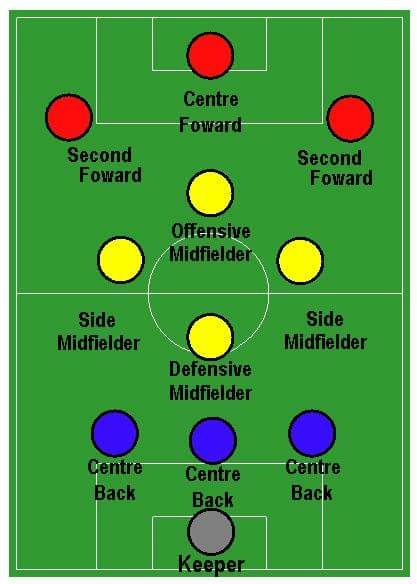 – 11 players on each side are the 22 paths of the Sephiroth.

– The start signal ( = sound) of the referee creates chaos.

– The ball is the soul, which is controlled by the players (i.e “planets”).

– The goal has 2 upright posts, which are 2 pillars. And the goalkeeper is the 3rd pillar.

– The goal itself represents earth, which is a gate, or portal.

– The goalkeeper represents a gatekeeper, who must save all balls ( = souls).

Btw.: Soccer is played on a flat field in a Stadium, or Dome.

Can you see the bigger picture?”

I do find it strange that witch doctors in Africa use witchcraft to win Soccer matches. Strange but true. (https://www.medindia.net/news/witchcraft-turns-soccer-into-occult-game-53527-1.htm)

And evidently there are animal sacrifices done to help win soccer matches. 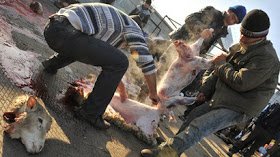 Below Is A Piece Of Information About An Occurrence In European Football In 2013.
A coach herded his players around for the sacrificial slitting of a sheep’s throat. He did it in secret and wouldn’t talk about it. Before each home game in the previous rounds, he and his men carried out the club tradition. He was sheepish about mentioning it when he said: “There is a tradition we do not like to talk about the details”.
But there was no hiding his belief that his team are in with a genuine shout of a giant-killing. He added: “in football it’s not only the strongest teams that win and there are many examples of this, not least in the champion’s league”!
Animal right groups including “people for the ethical treatment of animal” (PCTA) applied pressure to the “union of European football associations” (UEFA) for all owing the practice of animal sacrifice before the games. They stated that such a terrible and cruel practice has no place in sport and must be stopped immediately. 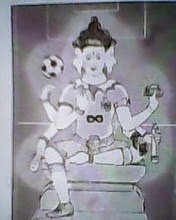 But this is really strange. Here is an article that connects the Antichrist to Soccer. Take it as you may. 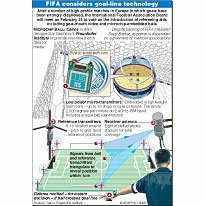 GN17391 Calls for the introduction of refereeing aids have increased after a number of high-profile matches in Europe in which goals have been wrongly disallowed. February 26, 2005 — The International Football Association Board meets in Cardiff to discuss the introduction of new technology such as goal-mouth video and a microchip-embedded ball. Graphic shows how the Cairos system, designed by the Fraunhofer Institute in Germany, is able to deliver real-time data on ball position, eliminating time delays associated with video replays. 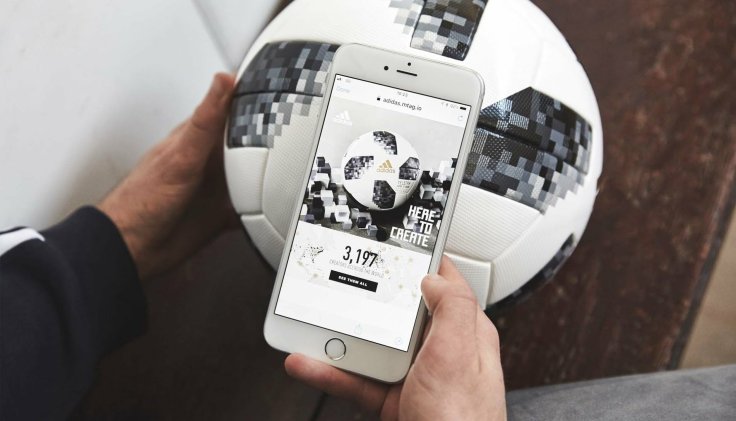 “So the new adidas Telstar match ball for the 2018 World Cup has a microchip inside it? Yep. But, what for? Good question.” (https://www.google.com/amp/s/www.soccerbible.com/performance/football-equipment/2017/how-does-the-2018-adidas-telstar-nfc-ball-work/amp/) 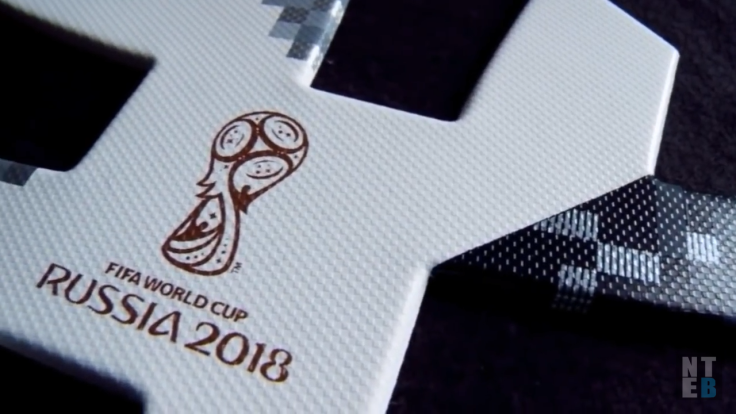 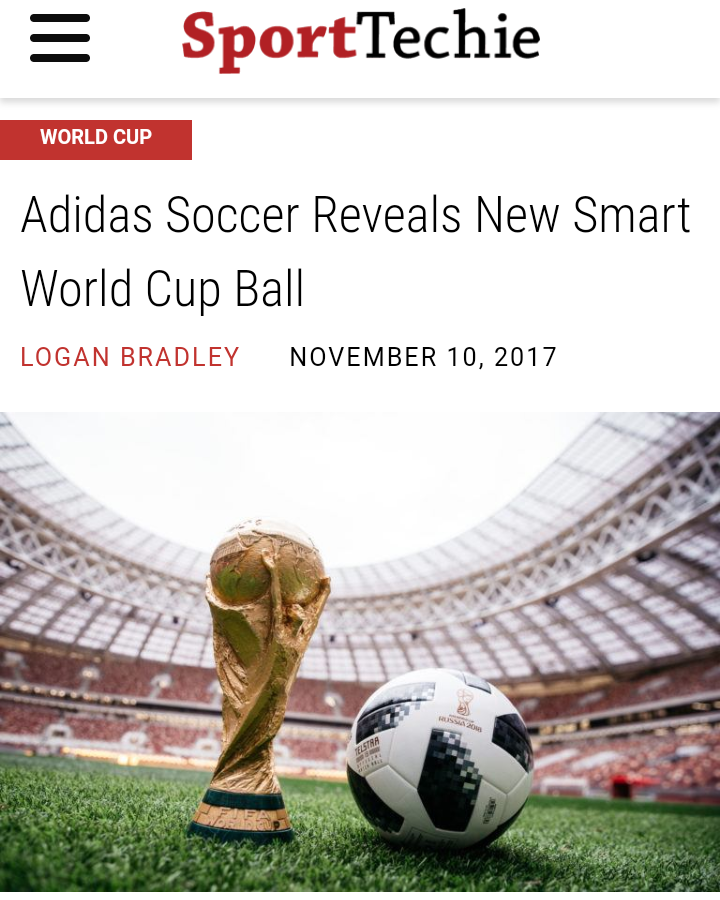 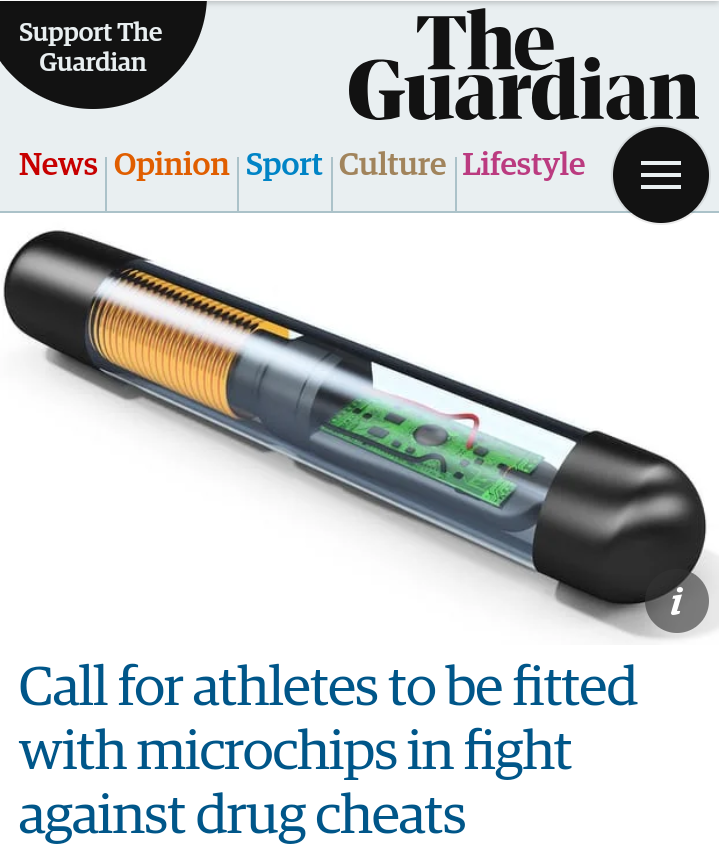 One thought on “Soccer or Sucker?”