There is a group called Catharsis who has gotten a permit to put a 45 foot tall naked woman in the Washington mall facing North towards the Washington Monument. They have an event every year similar to burning man in the Washington Mall called Catharsis at the Mall which features art and music. This year it is called “nurturing the heart” with an Isis goddess statue siding naked. They have asked the City for a permit for this November 10-12 event during Veterans day but plan on keeping it up for atleast 4 months until March of 2018. They are awaiting that final permit now. “She” is called R-Evolution. You can read the story here and here.

First off, if anyone doesn’t understand the Washington monument then let me say this first. The monument is a obelesk from Egypt and represents the phallic or penis of Osiris. When Osiris’ body was cut into 14 pieces by Seth, the only piece Isis couldn’t find was his phallus. She couldn’t find the missing piece to “resurrect” Osiris so she then made a golden phallus (dildo) and proceeded to use it to get impregnated by it. Witchcraft, magick..call it what you will. This is how the myth claims she became pregnant with Horus. Honestly, she became pregnant through a Mother/Son incestial relationship. Why not right? That’s how Canaan was born, Hams sin and Nimrods grandfather. This is the reason as to why the obelesk came about all overt the world. This is what it represents and is symbolic for Osiris’ penis.

Now that we have gotten that cleared up let me mention that the Washington monument is 666 feet tall at its base below ground. As we have seen Washington was a representative of Jupiter or Zeus. Zeus is another type of Osiris or Nimrod. This particular obelesk is representing the Egyptian and Masonic phallic of Osiris in the form of the American Freemasonic god George Washington.

The event behind this woman is called Catharsis. They had this 45 foot tall woman featured at burning man in 2015. As of recently they had a dragon that they showcased at last years Catharsis event.

Lets look at this word Catharsis to see what this exactly means. According to Webster dictionary it means to purge something that brings about a spiritual renewal. “a :purification or purgation of the emotions (such as pity and fear) primarily through art, b :a purification or purgation that brings about spiritual renewal or release from tension”. The etmyology is this word is this. “Catharsis and cathartic both trace to the Greek word kathairein, meaning “to cleanse, purge.” Catharsis entered English as a medical term having to do with purging the body—and especially the bowels—of unwanted material. The adjective catharticentered English with a meaning descriptive of such a physically cleansing purge. It didn’t take long for people to start using these words figuratively in reference to emotional release and spiritual cleansing.” (https://www.merriam-webster.com/dictionary/catharsis) 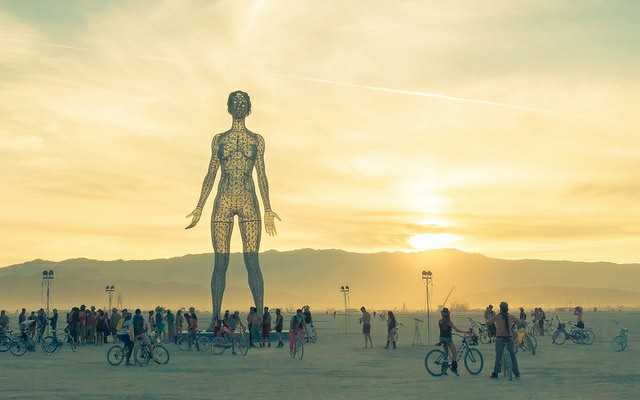 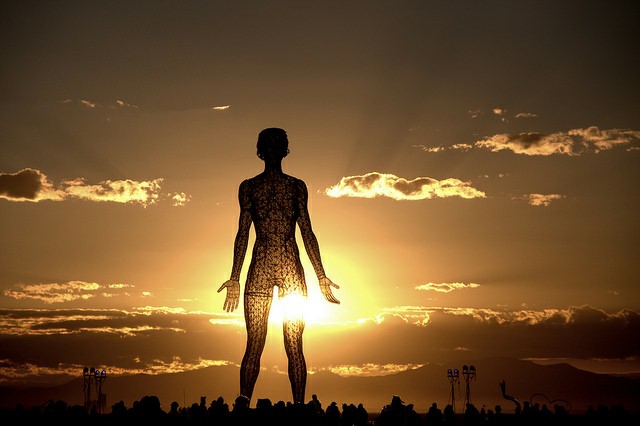 ​This comes from their fundraiser page where they have already raised 25k of their goal of 90k. Let me point out that the instipiration of this Isis comes from his best friend being raped at 9 years old. This is molestation in my opinion and not just raped. Please go back and reference my paper on the movie IT and Split and see how they are making this representative of how these are the “chosen” one’s for the beast. Its no wonder why there is so much pedaphilia running rampant nowadays. Also notice the models name is Deja Solis. Deja means “remembrance” while Solis is a form of Sol meaning Sun and can mean “comfort or consolation”. Remembering the Sun (or in this case son).

“R-Evolution is Deja Solis, a woman standing in her strength and power… expressing her humanity; how she feels when she is safe, when she can just be. R-Evolution is the third in a series of three monumental sculptures, The Bliss Project, by artist Marco Cochrane conceived of in collaboration with model Deja Solis, these sculptures are intended to demand a change in perspective… to be agents for social change.  They are intended to challenge the viewer to see past the sexual charge that has developed around the female body, to the person: to de-objectify women and inspire people across the world to take action to end violence against women, create space for women’s voices and demand equal rights for all, thus allowing everyone to live fully and thrive. 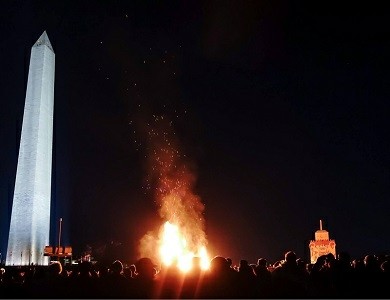 Standing 45 feet tall, R-Evolution was first brought to Burning Man in 2015 by Marco, partner Julia Whitelaw, and the Bliss Crew, and with your help, we will install her in front of the Washington Monument, facing the White House.

R-Evolution has been preliminary approved by the National Park Service for Catharsis on the Mall, November 9-12, 2017, coinciding with Veterans Day, and through March 2018.  Upon recieving the final permit, for up to four months she will be the focal point of a continuing vigil in support of education and awareness about the Equal Rights Amendment and will be present on the anniversary of the Women’s March on January 21, 2018.

Like all of Marco’s collaborators, Deja chose her personal expression, her pose, for R-Evolution.  R-Evolution is different than the first two sculptures in the series, Bliss Dance and Truth is Beauty. There is no overt action in her expression; she is not dancing in the face of danger, she is not reaching to meet herself and find her own truth.  In R-Evolution, Deja explores and expresses what she feels like when she is safe, strong and powerful when she can just be… a whole person… a woman, radiating her energy into the world.

R-Evolution is made of steel rod and tubing, utilizing two layers of geodesic triangles covered by a stainless steel mesh with LED lighting effects.

“The story of R-Evolution and The Bliss Project began when I was 7-years old and my best friend was a 9-year old little girl.  One day I was told, in way too much detail for a little boy, that she had been raped right outside of my house.  It was incomprehensible, horrible, I never forgot, I never understood… it still haunts me.  I thought… that man couldn’t have realized my friend was a person… if he really could see her, this wouldn’t have happened.” (https://www.generosity.com/community-fundraising/r-evolution-on-the-national-mall-2017–3)

This is third woman that Cochran has made in his series The Bliss Project. They are trying to reach their state of “perfect happiness” through bliss from their divine goddess. Its not going to happen. 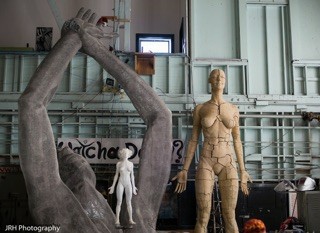 Here is the model Deja Solis. 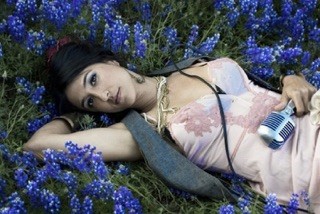 So what is the symbolic significance to all of this? What is being birthed here? Its simple I think. Anyone that has followed this blog fire the last year should know by now and I haven’t changed on this view. What they are birthing is that ancient Nephilim Antichrist spirit. No one actually believed that there would be literal “giants” in the earth again did they? Well I guess some still do. This same ancient spirit is being birthed awaiting the son to rise from the ashes and humanity. And notice that its passing through the fire? Read this to understand what this means.

This setting up of this corresponds with their dying god Saturn leaving Ophiuchus on November 18th. When this happens it is symbolic of the lost phallic of Osiris being found. The 14th piece (or 13th in some myths) that was lost for thousands of years and now it seems Isis has found it. Out of all places, it was found at the Washington oblesk representing Osiris/Nimrod and Jupiter. Symbolism at its finest…this is what they do. I’m telling you, something is taking place.

“The centerpiece is a ceremonial burn, which attendees describe as a healing, awe-inspiring moment. Artist Michael Verdon is returning for a third year to build a temple that will go up in flames.” (http://dcist.com/2017/09/the_burning_man_of_dc_is_back_and_b.php#photo-6 & http://dcist.com/2016/10/catharsis_a_burn_on_the_national_ma.php)

And I want to add this comment. A guy on YouTube pointed out that Penis and Phoenix are related (in his opinion). Interesting… 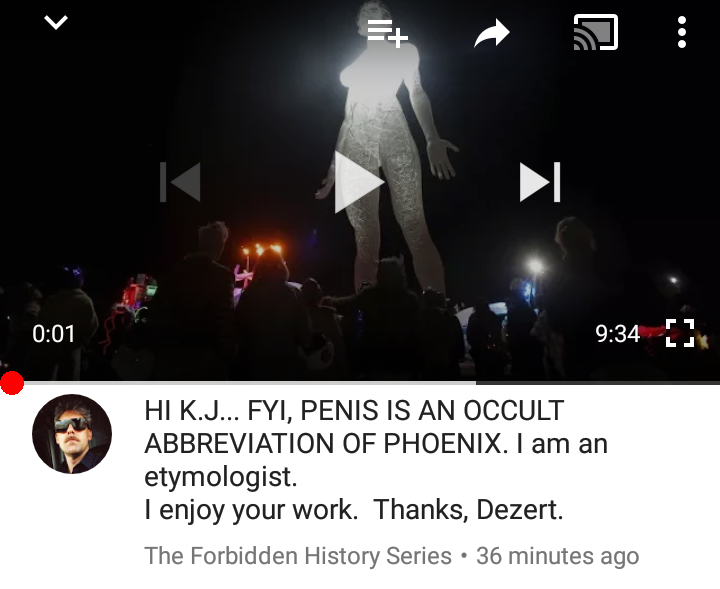 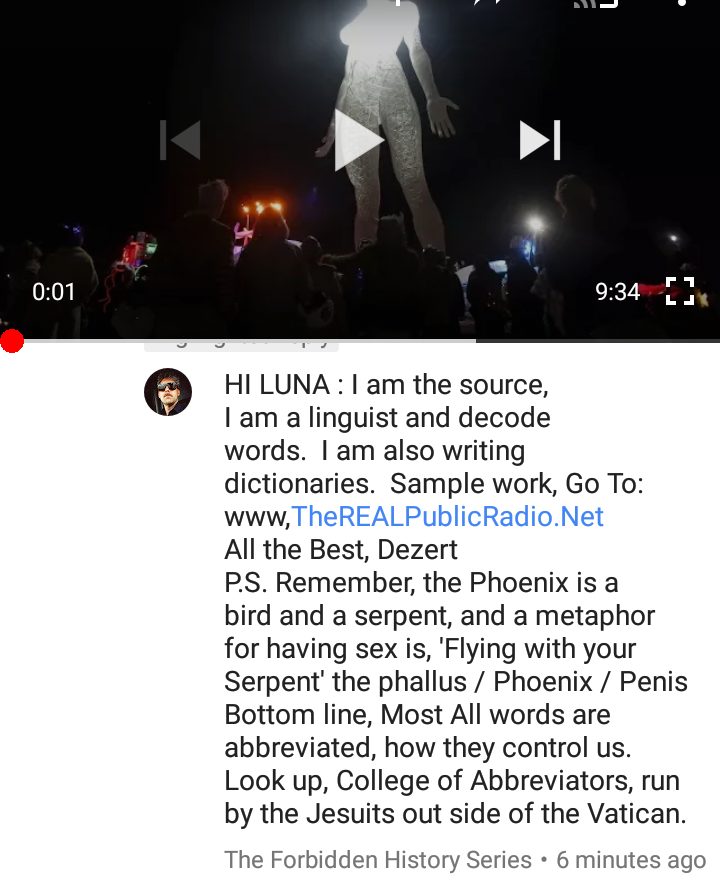 2 thoughts on “The 45 foot Isis standing with the Osiris phallic…”nurturing the heart”.”