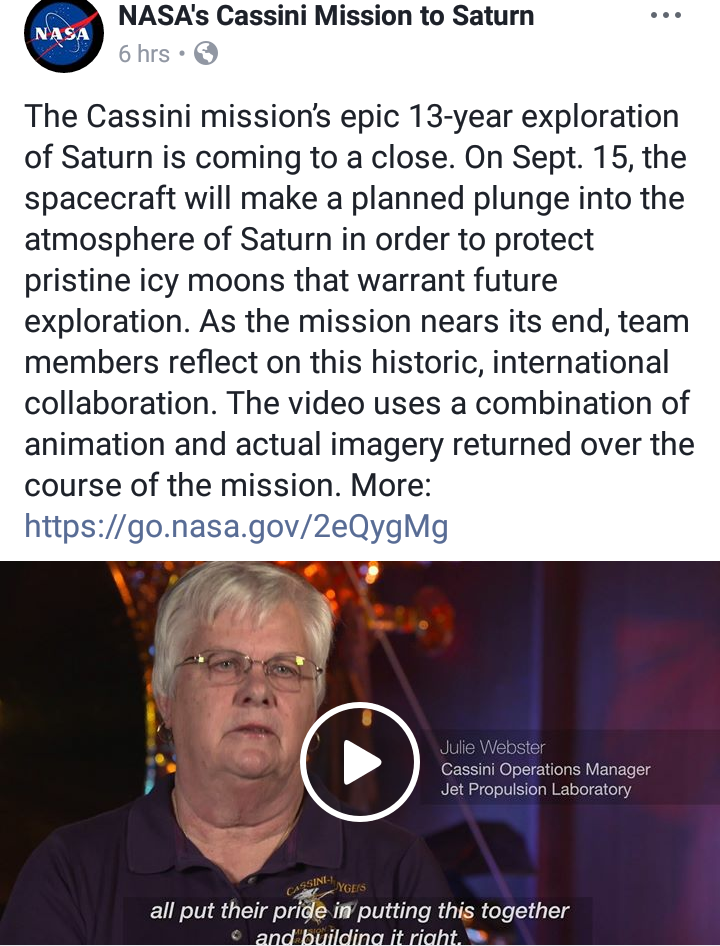 On September 15th the satellite Cassini will give its “last goodbye kiss” to Saturn. I wrote about this last week. Here is the article with the video that was posted by NASA today (9/11) regarding this “goodbye kiss”. As why does this article have to be “7776”? Really.

I want you to notice all of the symbolism in that video. The 7 year journey that led to its 13 year tour that ends on September 15th. I won’t even mention the falling from Heaven symbolism.

And then the NASA scientist says that Cassini will be “sending back science till the very last second”. What does that exactly mean? Well science means knowledge but we will get to that in a second. Let’s see what Paul had to say about this science in his letter to Timothy.

“O Timothy, keep that which is committed to thy trust, avoiding profane and vain babblings, and oppositions of science falsely so called: Which some professing have erred concerning the faith. Grace bewith thee. Amen.” (1 Timothy 6:20-21)

“O Timothy! Guard that which was committed to your trust, turning away from the profane and empty babblings and opposing views of what is falsely called “knowledge,” which some, by professing expertise, missed the mark concerning the faith. Grace be with you. Amen.” (Logos)

The word for science is ‘gnosis’ and we can see this word used for Gnosticism. It means knowledge. So evidently in Pauls day there were these same contentions with science and Christianity.

Albert Barnes says this in his commentary on this verse. “Religion has nothing to fear from true science, and the minister of the gospel is not exhorted to dread that. Real science, in all its advances, contributes to the support of religion; and just in proportion as that is promoted will it be found to sustain the Bible, and to confirm the claims of religion to the faith of mankind. See this illustrated at length in Wiseman’s Lectures on the connection between science and religion. It is only false or pretended science that religion has to dread, and which the friend of Christianity is to avoid. The meaning here is, that Timothy was to avoid everything which falsely laid claim to being “knowledge” or “science.” There was much of this in the world at the time the apostle wrote; and this, more perhaps than anything else, has tended to corrupt true religion since.”

And Adam Clarke tells us this in his commentary. “Και αντιθεσεις της ψευδωνυμου γνωσεως· And oppositions of knowledge falsely sonamed. Dr. Macknight’s note here is worthy of much attention: “In the enumeration of the different kinds of inspiration bestowed on the first preachers of the Gospel, 1Co 12:8, we find the word of knowledge mentioned; by which is meant that kind of inspiration which gave to the apostles and superior Christian prophets the knowledge of the true meaning of the Jewish Scriptures. This inspiration the false teachers pretending to possess, dignified their misinterpretations of the ancient Scriptures with the name of knowledge, that is, inspiredknowledge; for so the word signifies, 1Co 14:6. And as by these interpretations they endeavoured to establish the efficacy of the Levitical atonements, the apostle very properly termed these interpretations oppositions of knowledge, because they were framed to establish doctrines opposite to, and subversive of, the Gospel. To destroy the credit of these teachers, he affirmed that the knowledge from which they proceeded was falsely called inspired knowledge; for they were not inspired with the knowledge of the meaning of the Scriptures, but only pretended to it.” Others think that the apostle has the Gnostics in view. But it is not clear that these heretics, or whatever they were, had any proper existence at this time. On the whole, Dr. Macknight’s interpretation seems to be the best.”

So what does modern science in the sense of NASA represent? Before you find out just let me say that it reminds me of James 1:8 “A double minded man is unstable in all his ways.” You’ll get it once you read the etymology.

“This might be a good time to examine the etymology of the word science, It comes from the Latin scientia, from sciens, which means having knowledge, from the present participle of scire, meaning to know, probably—and here’s where it gets exciting—akin to the Sanskrit Chyati, meaning he cuts off, and Latin scindere, to split, cleave. The dictionary tells me there’s more at shed (presumably the verb, as in dog hair, not the noun, as in a shack).

So I look up shed, which derives from the Middle English for divide, separate, from Old English scaeden, akin to High German skeiden, to separate, which brings us back to our Latin friend scindere, and from there to the Greek schizein, to split.

We are all familiar of course with the root schizeinbecause of its famous grandchild schizophrenia(literally split mind), which is a psychotic disorder characterized by a loss of contact with the environment, illogical patterns of thinking and acting, delusions and hallucinations, and a noticeable deterioration in the level of functioning in everyday life. 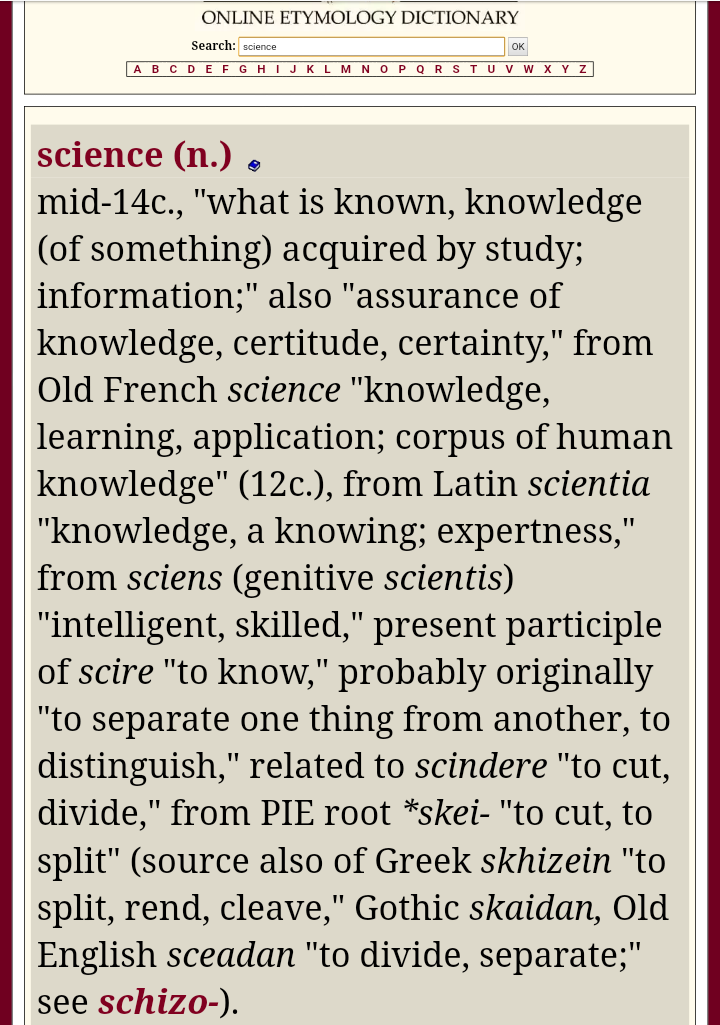 And then there is the man behind the name. Giovanni Cassini is who the Cassini satellite was named after. I can’t find anything on what his last name means which is kind of strange to me. But his first name can mean Gift of God and is the Italian version of John. Notice from the article below that he would’ve been 392 years old. See anything wrong with that combination of numbers? So 8 days before this big false sign in 9/23, Cassini sacrifices itself into Saturn while the real Cassini would’ve been 392 if people actually lived that long now. Smh. 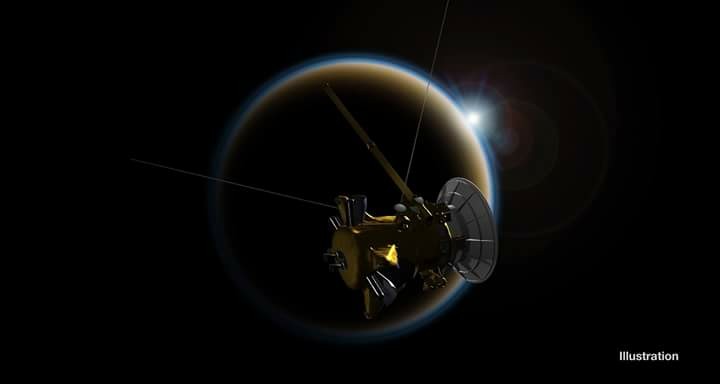 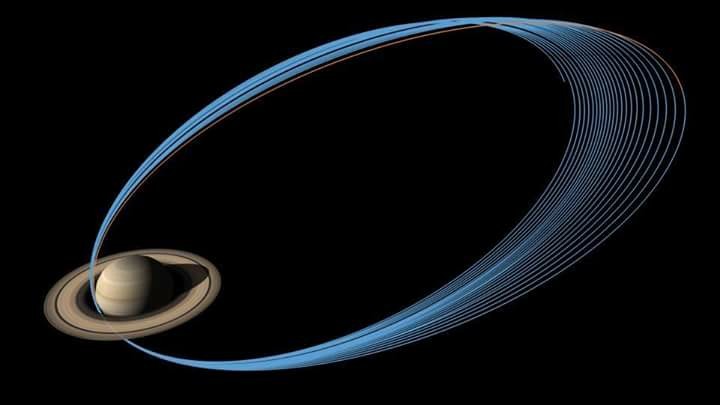