Is the Black Star representing the head of Osiris as the capstone? Is the eclipse on August 21st symbolic of judgement on the United States?

The “black sun” keeps popping up everywhere for some reason. There is a group of people who honestly believe that the “black Sun” will be the reason as to why this eclipse happens on 8/21. The black sun was bringing me back to the black star which some say is the same thing. And I’m starting to think that maybe the black star is actually the combination of the Moon eclipsing the Sun. Maybe the black star is the eclipse in itself? 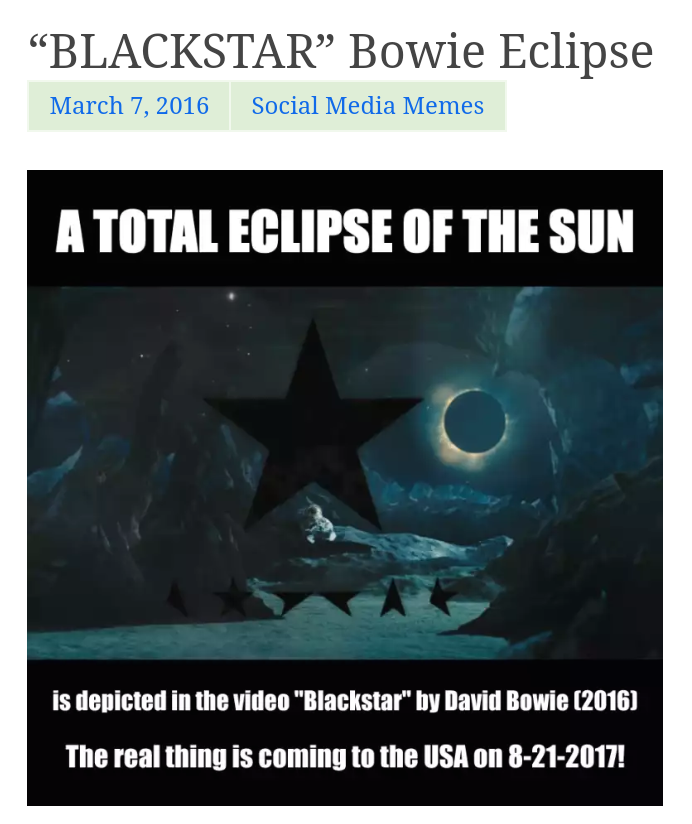 I remember occultist David Bowie’s last album before he died was called black star. Then you have Chris Cornell from Soundgarden who had there hit Black Holed Sun. Some believe Saturn is this Black Sun while others disagree and say it represents the Dog star Sirius.

Others say its neither of those two stars. I’m not sure what to make of it but they all seem to agree that when this black Sun comes it causes chaos which brings a new beginning. Reminiscent of the phoenix (Horus) rising from the ashes type of scenario or order out of chaos. This is what they all can seem to agree on.

I decided to go back and watch Bowie’s video for Black Star and his final video Lazarus. I’m not going to “break” these videos down but I noticed a few things in them. Notice that the black star ie the death/chaos that leads to Lazarus ie the resurrection/life/order. We are seeing this same symbology in Bowie’s last two videos with a symbolism of an eclipse. Now to the video. My first thought when seeing the opening scene of Black Star was taken back to i pet goat. The scene of this ancient astronaut (fallen angel) laying in darkness along the water reminded me of the scene in i pet goat where the “christ” character was on the boat .

We also saw the harvest field in Bowie’s video and the fish jumping in the boat of the “christ” character on i pet goat. The 153 fish in John represents the harvest. So we see a harvest scenario in both of these videos but they aren’t the harvest of the wheat. This is the false spiritual harvest of the tares. Those two scenes jumped out at me. Not to mention all of the jumping and hiking done by the 3 in a house and the women in the circle surrounding a skull. Now this skull made me think about Anthony Patches theory about the skull of Osiris and how its connected to the the capstone on the pyramid. I want you to read this before we go on. “The upright star of darkness (the black star image on Bowie’s album cover ) when mirrored, as inverted in the ‘otherworld’ of the dead, would be a symbol of light. To the Ancient Egyptians the star SIRIUS (Alt : Sothis) was a dual symbol of both Light and Darkness. This star was also known as the Dog star, at times attributed to Anubis – the Black Jackal of the Egyptian pantheon. This star governed the opening of the passage of fertility and life, and also into death.

Anubis was the closest deity to the deceased and as well as being the embalmer of the corpse, he would also lead the newly dead into the hall of judgement where the ultimate meeting with ‘OSIRIS’ (the lord of the underworld) could take place, after intense and vigorous trials . It is said in many accounts that at the conclusion of the Eleusinian mysteries, the ultimate and final mystery whispered to the candidate of the mysteries was “Osiris is a Black God”….For the Egyptians, the sun was a God, and we know that all stars are indeed suns, our nearest Star being our own Sun. This fact is something the Egyptians also knew very well. Osiris was known as the Sun in Amenti (The underworld)… this considered, we could easily replace this phrase “Osiris is a black God” with “ Osiris is a Black Star”. (http://www.trebuchet-magazine.com/osiris-is-a-black-star/)

So you can see that Osiris (also known as Nimrod) represented the black sun/star. The interesting thing is that Osiris died and brought about his resurrected son Horus. So Horus could in fact be representing the black sun/son. In the video notice the black woman holding the skull of Osiris. This would make the woman Isis or the black Madonna holding the dead Osiris’ skull bringing about this resurrection (all the people convulsing) or should I say possession of Horus. This is the line drawn of the seperating the wheat from the tares.

Now when looking at the other side of Bowie’s coin for this black star we have Lazarus. This is representing the resurrection. Something interesting about this video was spotted by a few bloggers. It has to do with the first degree (Apprentice) ritual of the Ancient & Primitive Rite of Memphis and Misraim. “There is an image in the Lazarus video on which a number of bloggers have already commented: where Bowie sits frantically writing at a desk, on which rests a skull. Now the obvious interpretation is that it was a reference to Bowie’s own impending mortality, but when I saw it, it stirred the Sumner Family Brain Cell to life, and got me thinking, where have I seen that before? 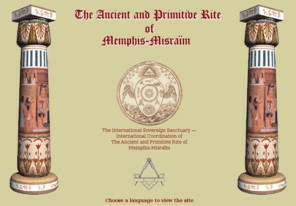 The answer is: it comes from the first degree (Apprentice) ritual of the Ancient & Primitive Rite of Memphis and Misraim – a particularly esoteric form of Freemasonry. Assuming the candidate for initiation passes the ballot, just before the ceremony of his initiation,…[t]he Expert (i.e. Junior Deacon) then takes possession of the Candidate in the Parvis, carefully binds his eyes and leads him to the Chamber of Reflection. He has him sit before a table, sparingly furnished with a real human Skull; a lit wax Candle, half-consumed; a sheet of white paper, pen and ink. The seat is a stool without a back. He lights a little Myrrh, the traditional funereal perfume, in a corner of the room, in a Censer containing lit coals. Expert: – Sir, alone, left to yourself, before an image of termination of terrestrial Life, I invite you to write your Philosophical Testament. 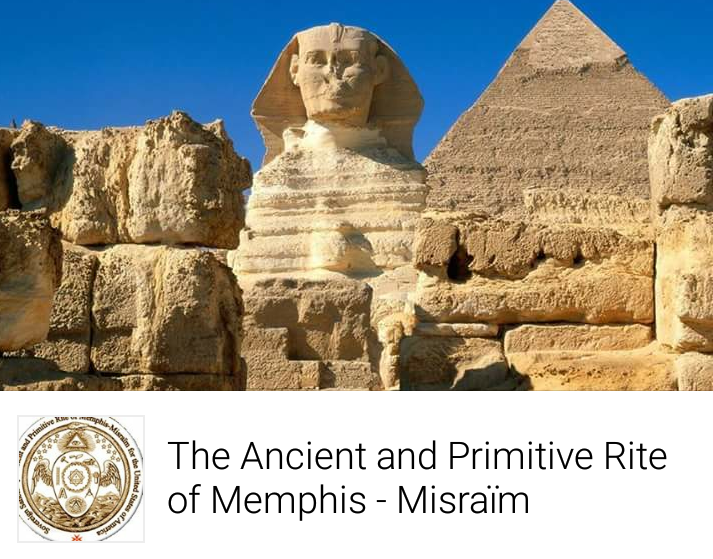 The “Philosophical Testament” consists of the candidate’s reflections on his duties to God, the World, and himself: but more especially, like its name suggests, how the candidate would answer these questions if his words were the final legacy which he leaves on Earth. However, the code-word “philosophical” indicates that one is meant to interpret it alchemically. In other words, Death is not the end for the candidate – i.e. for David Bowie – but is the first step on the path to spiritual transmutation.” (https://solascendans.com/2016/01/14/david-bowie-closet-occultist/) 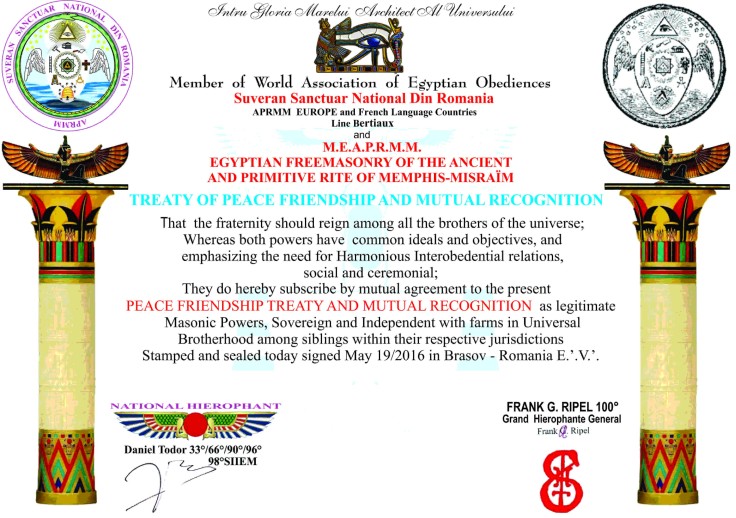 Looking at the 2 pillars here on the Memphis-Misraim documents reminds me of the 2 pillars that hold up the Arch of Triumph which in my opinion is connected to Jupiter. Now let’s look at one last thing about this black sun or star business. The black sun is represented by the swastika. O don’t really need to say much about it because mostly everyone gets this symbolism. But look at the picture below and then read the article below.

“The reverse swastika of the Nazis represents the “Black Sun” as it is backwards. The Black Sun is of the void. It is a blackhole where all light is drawn in and nothing escapes. The black sun is Plutonian in concept (astrologically) and represents the necessary death and transformation before new life can occur. Those of us who have meditated on the symbol of the black sun have seen the lightening bolts eminating from the center as in the National Socialist symbol above. This is the void of creation as when the blackhole can absorb no more into the vaccuum, it implodes like an atom bomb and this is where the “Big Bang” of creation originates…The color black has become synonymous with “evil” but quite the contrary is true….the color black represented new beginnings. Black is the container of light as the God Beelzebub said “Darkness is light turned inside out.”” (http://www.angelfire.com/dawn666blacksun/Symbols666.htm) 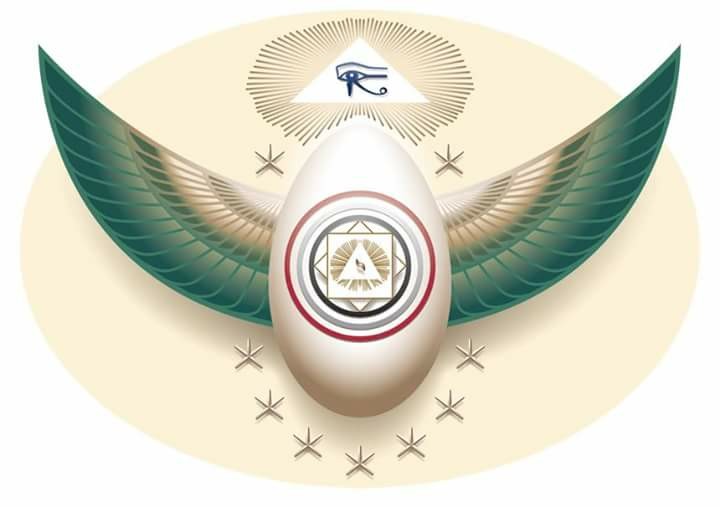 Oh yeah…remember my first paper on this eclipse? I mention the Ogdoad or the 8 gods that are allegedly coming back to reign. Here is the egg of creation on this ancient Egyptian rite. Some have connected this Ogdoad to CERNs LHC.

The first held that the world was born from a cosmic egg created by the gods of the Ogdoad. It was invisible as the sun had not yet been born. When it opened, it revealed the “bird of light”, an aspect of the sun god Re (occasionally the egg was said to contain air, associated with Amun and Amaunet).” (https://templeofalexandria.wordpress.com/ogdoad/) “The LHC is built from blueprints channelled (sic) from the hyper-dimensional beings of the Egyptian Ogdoad.” “The Ogdoad (meaning eight-fold) represents the eight deities of the Ancient Egyptian pantheon. According to the mythology; the Ogdoad consisted of four male-female pairs, inhabiting a vast and dark void maintained prior to the birth of the Universe. An unforeseen imbalance in their respective forces creates the Sun God Ra. Given the pivotal nature of the Ogdoad to the Ancient Egyptian world view, we would expect some reference to it in the primarily symbolic language of the Masonic sects, which draw from this endless source of magic. We find that the Ogdoad finds expression in Freemasonry through the Masonic double square…The Ogdoad is an important part of Masonic and Aurum Soils initiation rites and represents the unification of cosmic forces.” (http://pearlsofwar.blogspot.com/2010/01/e8-sphere-of-death.html?m=1)

Let me throw this in just in case. One of the murals at a North Carolina Bank of America of a young Masonic initiate that could resemble a young Trump. The bankers are planning something as an eclipse takes place. The next scene is of what looks like fallen angels falling from the sky while there is chaos below. 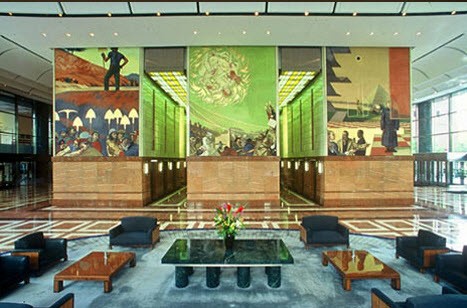 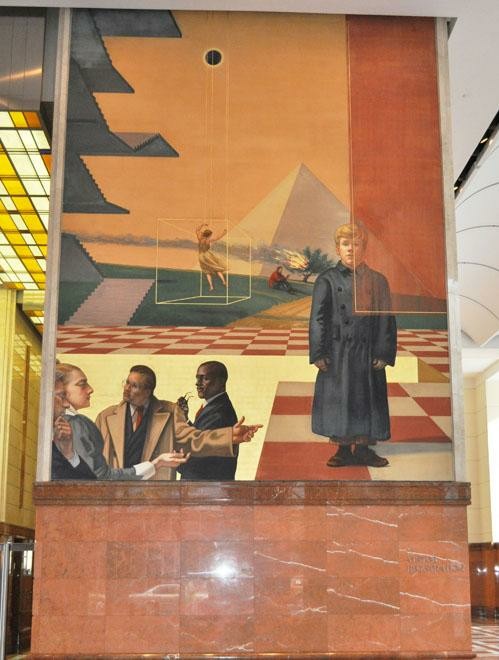 Is there something symbolically going on here with this Eclipse that might have to do with an economic collapse?