When those of the 9/23 Rapture cult are confronted with original Greek of Revelation 12:1 they usually refuse to believe what Scripture actually says. Then there are some who accept the Greek for what it says but then come back with “well Jesus wasn’t raptured, he ascended and Revelation 12:5 says the child was harpazdo’ed (raptured).” Then they say because of this, that the church is the man child. I still can’t figure out how they can even get to that conclusion. Not unless ot comes from Scotty Clarke’s twisting of Scripture of how the Church want birthed at Pentacost and will ne birthed at the rapture” or in this case, September 23rd 2017.

Here is what Revelation 12:5 actually says.

“And she brought forth a man child, who was to rule all nations with a rod of iron: and her child was caught up (ἡρπάσθη) unto God, and to his throne.”

In order for this to be the Church they have to seriously twist scripture as I mentioned above. And besides that, the Church has never ruled with a rod of iron only Jesus. I mean not unless your the Vatican and then yeah, they have ruled with a rod of iron. So follow the Vatican if you like. This is not the Church that was caught up to God but it was Jesus. And we have an Old Testament witness in verse 2 of Psalm 2. “7  I will declare the decree: the LORD hath said unto me, Thou art my Son; this day have I begotten thee. 8  Ask of me, and I shall give thee the heathen for thine inheritance, and the uttermost parts of the earth for thy possession. 9  Thou shalt break them with a rod of iron; thou shalt dash them in pieces like a potter’s vessel.” The Son or male child is in fact Jesus who holds the rod of iron.

Watchman Alexander also makes a great point as far as this snatching away of Jesus goes. “Some people will object that the Messiah was not snatched away, but rather took himself away, but that is not the testimony given in the Gospel of Luke. Luke writes that Yeshua was “anephereto,” which means “carried up” by an external actor. Then, in the Book of Acts, an angel speaking about Yeshua uses the word “analemphtheis,” meaning “one being taken up” as a passive subject. These verbs are very compatible with being snatched, especially when we consider how the disciples must have perceived it—having the most important thing in their lives removed from them must have seemed like having gold snatched from one’s hand.” (http://www.watchmanalexander.com/blog/we-may-be-looking-at-the-cosmic-sign-of-the-antichrist-in-september-2017)

I believe John used the catching away terminology instead of the ascension wording because this was a typology of what’s to come in light of our catching away at the time of the resurrection on the last day. Jesus was giving us this perfect example of the resurrection of those living on the last day. Satan will come with vengeance and fury to kill the remnant church that Jesus will have to pluck us out of the fire and snatch us away. This is the bodily resurrection of those that are alive in perfect harmony with those that sleep.

I like how David Campbell says it in his book “Mystery Explained: A Simple Guide to Revelation”. “At the cross, it seemed that the dragon had at last succeeded in his mission to devour the child. Yet at that very moment, the child was caught up to God. This clearly describes the resurrection and ascension of Christ. The faithful Christians at Thyatira are told they will rule the nations “with a rod of iron” even as Christ himself does (Rev. 2:27). Christ is referred to as the male child specifically because Psalm 2 identifies him as the Lord’s “son” (Ps. 2:7, 12). It was at the very point of the resurrection and ascension, not at some date in the distant future, that Christ received the “rod of iron” prophesied in Ps. 2:9 and took up his kingdom rule. Now, seated at the right hand of the Father’s throne, he has begun to exercise his authority over the nations of the world. The fulfillment of his rule will come at the end of history, when he wields the “rod of iron” with absolute and consummate power (Rev. 19:15).”

But let’s go to the Greek and take this a step further. The word used in Revelation 12:5 for “was caught up” is hērpasthē (ἡρπάσθη). This worrd means that something was caught up or snatched up in a violent manner. Something that was in dire straights and needed saving at that very moment. Now this word hērpasthē in the Greek tense and mood is Aortist Initiative Passive. The same as Revelation 12:1 & 3. This was something that happened in the past as John wrote what he saw. So this catching away cannot be the Church based off of the Greek. 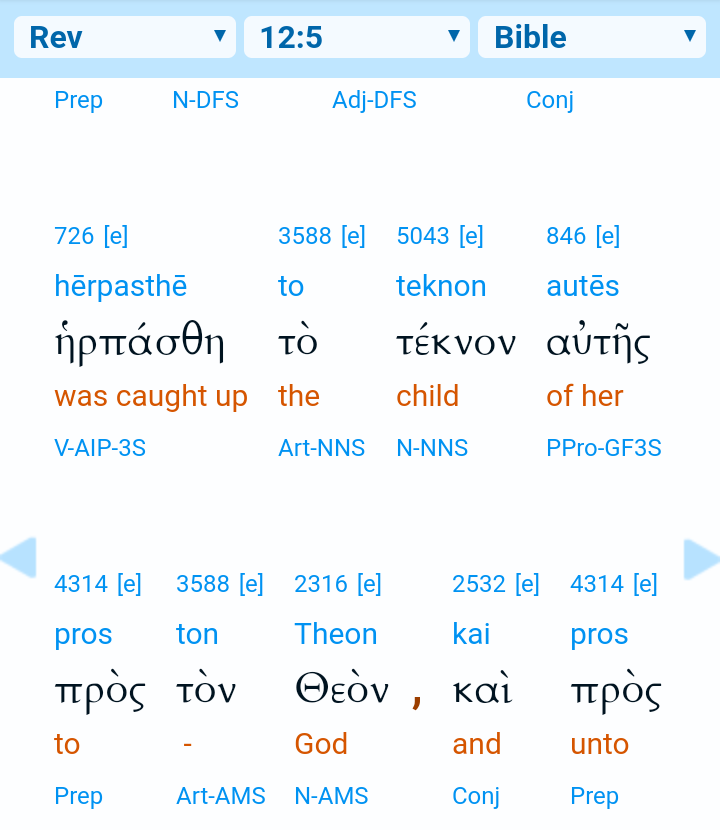 The 9/23 rapture cult proponents try to say this is their mysterious secret catching away based off of 1st Thessalonians 4:17 catching away. “Then we which are alive and remain shall be caught up (ἁρπαγησόμεθα) together with them in the clouds, to meet the Lord in the air: and so shall we ever be with the  Lord.” The actual word used here in this verse is harpagēsometha (ἁρπαγησόμεθα). This comes from the same root word (harpazō) that is used in Revelation 12:5 but there is a huge difference. Harpagēsometha in this verse is referring to something that happens in the future. It is a Future Indicative Passive. So this doesn’t and will not line up with Revelation 12:5. People can get mad all they want that it doesn’t fit their agenda but they need to take that up with the Greek text not me. If John wanted to use a future catching away in Revelation 12:5 for the male child then he would’ve used this word, Harpagēsometha. 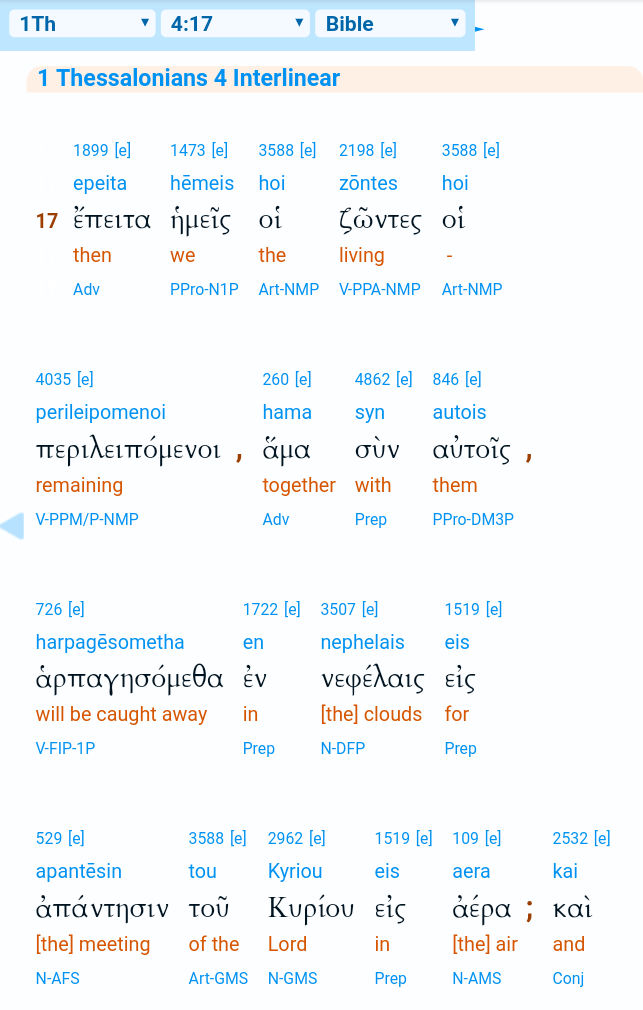 So is the catching away of the male child in Revelation 12:5 a future event? No its not. Matter of fact, according to the Greek, the majority of Revelation 12:1-9 was written in the passive form and it all happened prior to John even writing any of this. In one case in verse 6 where the woman “fled” is actually an event that was actively happening in John’s day and is continuing today. In verse 9 when Satan was cast from heaven, it was a past event but Satans decieving the whole world is an active event that is continuing to this day. So as Satan is actively decieving the whole world the woman is fleeing from the dragon.

So these are the facts, according to the original Greek, Revelation 12:5 has happened. It was Jesus at the resurrection and ascension not the delusional view that its the Church at the “rapture”. And I would even say because of the wording of John, it would be the resurrection of Jesus. As Satan thought he killed and defeated the Messiah, Jesus rose from the dead and defeated death. Death has no more sting and John using hērpasthē (ἡρπάσθη) explains his resurrection so eloquenly.

The 9/23 rapture cult can believe the word of man over scripture if they like but they will be held accountable for these views if they don’t repent and turn from these falsehoods. It seems like they have now placed all of their rapture scriptures at Revelation 12 and this is a dangerous thing to do. So be it.