The 9/23 Cult (that’s what they are now) believes that when women like Beyonce or Ivanka are seen with the symbolism of Revelation 12:1 Sign, they believe its a satanic mockery of God. The problem is this, its a false sign when you think it is a future event and has nothing to do with the birth of Jesus. So when you see symbolism of women portraying this sign, they are right on point with their fellow occultists. They too believe this Jupiter birthing is something big that takes place in September. And it is. Its not the rapture or anything that has to do with the Messiah, its all about the anti-Messiah.

So it leads is to this. A week ago they had the G20 and Ivanka (or should I say Oholibamah or Yael) sat in for her dad while Donald wasn’t present. A picture came out that has Ivanka sitting in front of a well placed Argentina flag.

It just so happens that the flag has the Sun on it and one of the pictures is with the Sun over her left shoulder. Just like Stellariums screenshot of September 23rd, 2017. The placement of the flag and her sitting in front of it was either the biggest coincidence or a planned orchestrated event. And I don’t believe much in coincidences anymore. 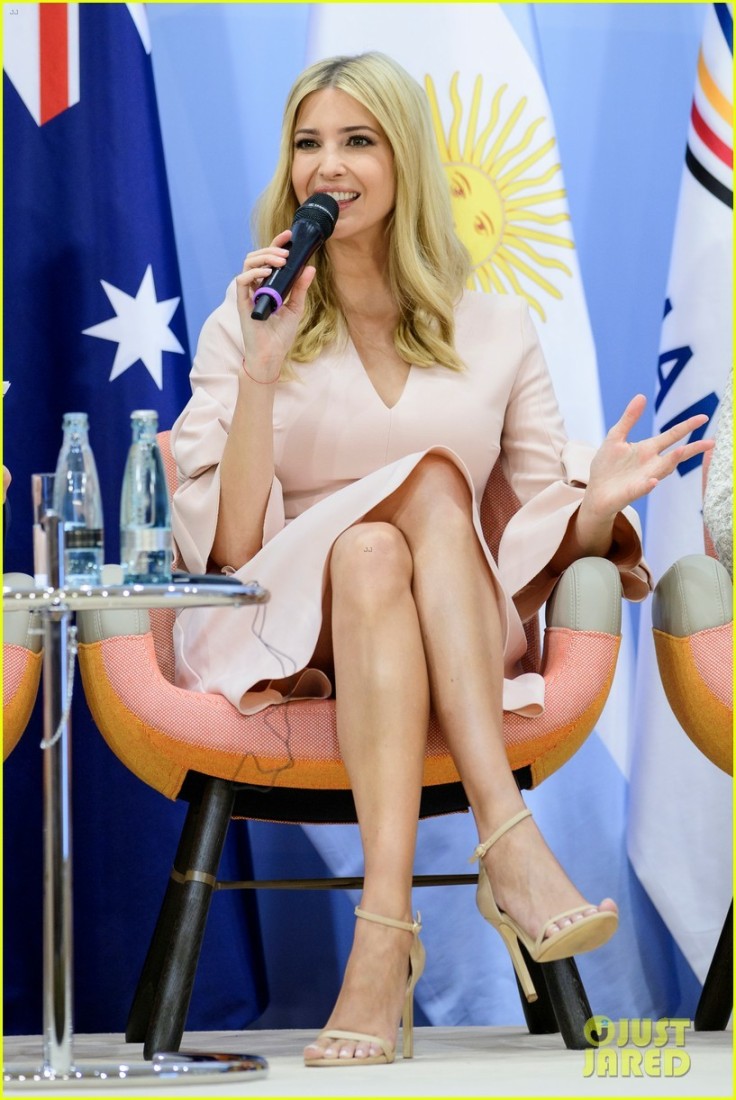 So you have this weird symbolism of these women and this “Revelation 12:1” sign going on. And they even added a Ivanka halo goddess shot to the mix.

Now during this last year’s Grammys we saw all of this symbolism with this false sign with Beyonce. She came out as the African goddess Osha who is in fact just Isis. She was even pregnant at the time and went through a symbolic birthing period.

She ironically was also clothed with the Sun in a weird way.

And why I’m talking about Beyonce, let me bring up that they just announced the first pictures of her twins Romulus and Remus…oops I meant Sir Carter and Rumi. Its a strange picture that was just like the pregnancy shot. Matter of fact you can see that it was taken at the same place as the first one, probably on Malibu by Awol Erizku. “No doubt you are aware of this by now, but last month Beyoncé gave birth to twins—Sir and Rumi Carter—and today she shared a photograph of her holding them in front of a soaring canopy of flowers, wrapped in a stunning pink gown by Alejandro Gómez Palomo. It’s a sequel of sorts to the pregnancy shot that she released back in February, shot by up-and-comer Awol Erizku.

At the time of that original photo, Erizku’s involvement was something of a secret. Presumably because of non-disclosures and privacy concerns and so forth, no one at first quite wanted to confirm his involvement, but it eventually came out. This time, he was credited with the photo upon its release.” (http://www.artnews.com/2017/07/14/awol-erizku-shoots-beyonce-again/)

Some have suggested the new photo is conjuring Sandro Botticelli’s “The Birth of Venus”. How fitting is that? “Most pleasing of all is the suggestion, from the pose and styling, that she is simultaneously Botticelli’s Venus and the Virgin Mary, but better than the latter because she is holding not one but two babies: the memorably named Rumi and Sir Carter. Has Beyoncé given birth to two messiahs? Look at the photo, people. Images don’t lie.” (https://www.theguardian.com/fashion/2017/jul/14/beyonce-and-the-instagram-that-gained-5m-likes-and-counting?CMP=share_btn_fb) 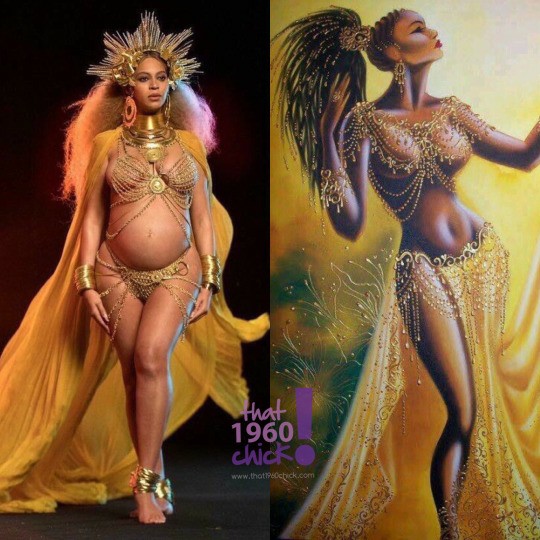 And the kids names have been trademarked evidently. How strange is that? (https://www.google.com/amp/www.telegraph.co.uk/news/2017/06/30/beyonce-jay-zs-twin-names-revealed-couple-file-trademarks/amp/#ampshare=http://www.telegraph.co.uk/news/2017/06/30/beyonce-jay-zs-twin-names-revealed-couple-file-trademarks/)

What Does Rumi Mean? Beyonce & Jay Z Reportedly Chose The Name For One Of Their Twins 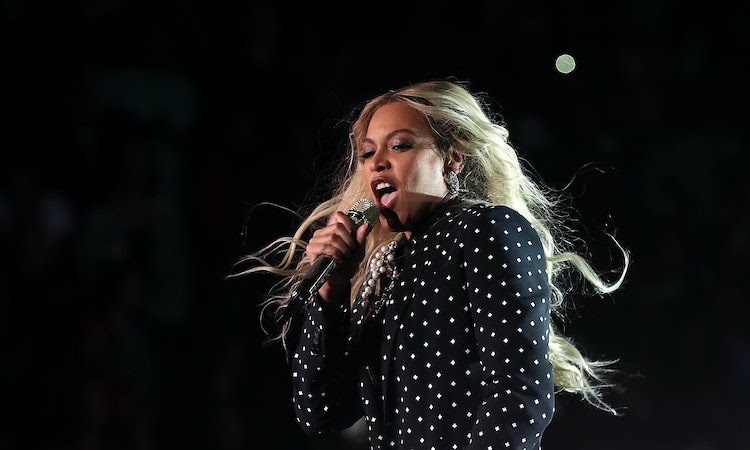 After shocking the world with an extravagant pregnancy announcement photo in February, Beyoncé and Jay Z welcomed two new babies into the world. But now that TMZ is reporting that theCarter twins are named Sir and Rumi, what does the name Rumi mean? The name is an interesting choice, but that was to be expected from the parents of Blue Ivy Carter.

According to NameBerry.com, a leading baby names site, Rumi is a feminine name of Japanese origin. The name means, “beauty,” “flow,” or “lapiz lazuli.” Based on the characters, or kanji, used to write the name, Rumi can also mean “water,” or “current,” all of which are beautiful, artful descriptions that complement the poetic natures of both Beyoncé and Jay Z’s work. One of the meanings of Rumi could also hold a very lovely connection to older sister, Blue. Lapis Lazuli is a blue semi-precious stone that, according to Crystal Vaults, many people over history have held as a “symbol of royalty and honor, gods and power, spirit and vision. It is a universal symbol of wisdom and truth.”

Beyoncé has introduced her newborn twins to the world, and she did it the same way she announced her pregnancy back in February: with a gorgeous, heavily referential portrait on Instagram.

The portrait — most likely taken by Awol Erizku, the photographer behind the lead images in the pregnancy photo shoot, though that has yet to be confirmed — shows Beyoncé cradling her twins, draped in a flowing robe, standing in front of a floral wreath that looks like the one she was kneeling in front of back in February. It’s an evocative image with a lot to unpack, so let’s look a little closer:

Most of the imagery the new maternity portrait is working with is the same basic toolkit that the pregnancy portrait used, but it’s all been amped up. The blue veil is still heavily reminiscent of Renaissance portraits of the Madonna and child, but the robe ups the resemblance — and now that Rumi and Sir Carter are here, Beyoncé’s pose echoes images of the Virgin Mary cradling the baby Jesus even more strongly.

But in her maternity photo, Beyoncé is standing in Venus’s very pose, one leg slightly lifted as if she’s about to step forward out of the portrait. And her floral silk robe is strikingly similar to the floral silk mantle that a nymph is about to drape over Botticelli’s Venus.

Everything that was promised in the pregnancy portrait is realized in the maternity portrait. Before, Beyoncé was suggesting Venus and Mary; now she’s taking on their literal poses. Before, the colors were saturated and the light was subdued, suggesting an expectant, waiting atmosphere; now the light gleams brilliantly off Beyoncé and her babies: The waiting is over and the twins are here.

And if you made it this far…I think she resembles Squidward more than Venus.