The Temple Institute announced that they have 5 potential red heifer candidates that will be born in spring of 2018.

This article comes from The Temple Institute (6/28/17) regarding where the ashes of the red heifer were burnt. It was on the Mount of Olives and I go over all of this in my book. (The Temple, The Abomination and The Holy Place https://www.amazon.com/dp/1516945433/ref=cm_sw_r_cp_apa_Bd-uzbBZTH6BP) They are starting to push this abomination once again.

“This is the statute of the Torah which HaShem commanded, saying, Speak to the children of Israel and have them take for you a perfectly red unblemished cow, upon which no yoke was laid.  And you shall give it to Eleazar the kohen, and he shall take it outside the camp and slaughter it in his presence. Eleazar the kohen shall take from its blood with his finger and sprinkle it toward the front of the Tent of Meeting seven times.” (Numbers 19:2-4)

In this week’s Torah reading of Chukat we read about the burning of the red heifer outside the Israelite encampment, directly opposite the Ohel Mo’ed (Tent of Meeting).

The following article by Pinchas Abramovich which we have translated from the Hebrew, discusses where the red heifer was slaughtered and burned in Jerusalem, when the Holy Temple was standing. The burning of the red heifer was required to be done due east of the Holy Temple, in a precise location from which the kohen (Temple priest) performing the procedure could look directly into the Temple Sanctuary and the place of the Holy of Holies. Is it possible to locate today the precise location where this was done?

Parashat Chukat opens with the commandment of the red heifer: a person who came in contact with a dead person, or a grave site, or who was inside a tent in which a dead body was located, must be purified of his impurity by being sprinkled with purifying waters mixed with the ashes produced by the burning of a red heifer. The burning of the heifer and the sprinkling of the waters are performed in the desert by a kohen outside of the Israelite encampment. Later, this was performed on the Mount of Olives outside of walled Jerusalem, east of the Holy Temple. This was done in a location from which the kohen could clearly see into the open entrance of the Holy Temple. He would slaughter the heifer and sprinkle its blood seven times in the direction of the Temple. He then burned the cow in what was referred to as a ‘wine-press’ and gathered up the ashes of the heifer.

The Mishnah and the Tosefta to Tractate Parah (chapter 3) describe the location of the burning of the heifer on the Mount of Olives, in a place known as the ‘wine-press,’ due to its shape bring similar to that of a wine-press in which grapes were tread upon. This ‘wine-press’ was hewn into the mountain bedrock, beneath which cavities were excavated, in order to create a separation through which impurity could not pass, lest there be a burial site hewn into the bedrock below. The kohen who sprinkles the blood stands on the Mount of Olives and looks westward to the site of the Holy Temple and from there towards the Holy Temple itself, and in the language of the Mishnah (Meudot 2): “The kohen directs his gaze toward the Temple Sanctuary while he is sprinkling the blood of the red heifer.”

Archaeologist Yonatan Adler proposes identifying the site of the burning of the red heifer on the Mount of Olives in the courtyard of the church of Domanus Plavit – the Church of the Dama, which is located directly to the east and at the same elevation of the opening of the Temple in the Dome of the Rock, as this is the only area on the Mount of Olives from where the kohen can look directly into the entrance to the Holy Temple, through all four gates described above.

Indeed, during the archaeological excavation which was conducted in the churchyard, and even in a survey done above the surface, he was able to reveal everything that was required in order for this location to be the actual site of the burning of the red heifer: the churchyard is on a rocky area and it is built on huge cavities carved into the bedrock. Between these hollow spaces exists a large area used today as an underground water cistern. A wine-press from the Byzantine period was found in this courtyard, which is reminiscent of the wine-press shaped location described as being the site of the burning of the red heifer in the Mishnah. In excavations conducted during the construction of the church in the 1950s, a mosaic of an important Byzantine church was discovered, attesting to the importance of the site as early as the ancient period. Like many Byzantine churches, this may also preserve the importance of the place even before the construction of the church, even from the time of the Holy Temple. 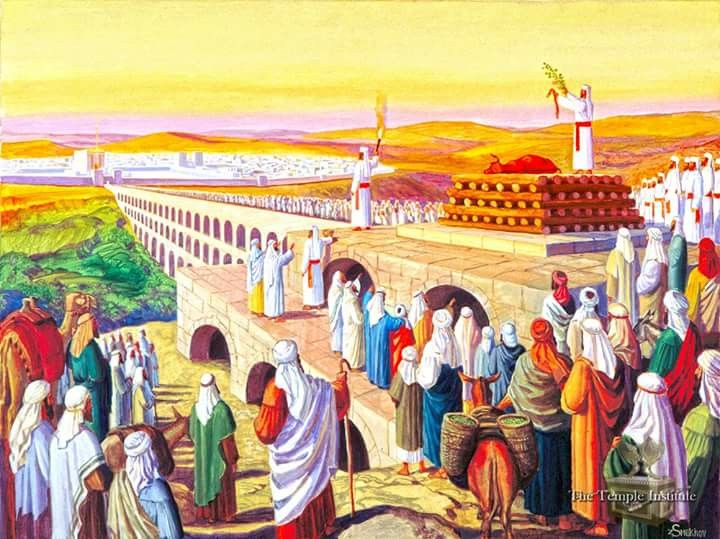 In these excavations in the 1950s, there was also discovered a large Jewish cemetery with hundreds of burial niches, tombs and ossuaries from the Second Temple period. Once again, the stark contrast between the two functions of the Mount of Olives increases: a cemetery on the one hand, and a house of purity on the other, upon which the purity of the entire nation of Israel is dependent. Similarly, it is said that they  who burn the red heifer ‘purify the impure and defile the pure,’ and as the Midrash of our sages of blessed memory in tractate Niddah (9) states “Who can bring a clean thing out of an unclean one? Not one.” (Job 14:4) This reflects the mystery of the purifying waters which purify the impure, but should another come in contact with these waters, he would be rendered impure. (https://m.facebook.com/story.php?story_fbid=10150866985324969&id=22738684968)

TEMPLE TALK RADIO: THE LIBERATING POWER OF THE ASHES OF THE RED HEIFER

Yitzchak Reuven shares an update on the Temple Institute’s Raise a Red Heifer in Israel project with the exciting news that five red angus cows are currently carrying potential red heifer candidates. This good news of course coincides with this week’s Torah reading of Chukat, in which the laws of the Red Heifer are presented. Even as we excitedly are anticipating the prospect of being able to nullify the ritual impurity of contact with death via the ashes of the red heifer, the Muslim death cult is being celebrated on the Temple Mount in the final days of Ramadan as candies are being handed out in packages bearing the faces of terrorist murderers of innocent Jewish men, women and children.

THE CUTEST (POTENTIAL) RED HEIFER EVER!

Thank you to Karen of Washington state who shared with us this photo of a red heifer candidate which was born on her farm. This photo was taken when the heifer was three days old.