When I recently watched the documentary (at the end of this article) on the Arch of Triumph in Arona, Italy, something stood out to me that I didn’t seem to catch before. Roger Michels from the IDA said something that caught my attention. He basically said that they (IDA) weren’t the ones who originally wanted the Arch built, it was actually a few people from TORART and D-Shape. Michels said that they were just able to help supply some of the photos that were provided by Khaled al-Asaad, the archeologist and site custodian in Palmyra. I always assumed that the IDA and UNESCO were the ones behind this Arch being built but that doesn’t seem like the case.

(The videos I posted were taken down for some reason)

According to press releases, they actually got a blessing from Dubai in order to make the Arch. And the Arch that we are seeing is a small scale model that was originally intended to just go around the world. If you actually read the the wording they use they have a full scale model of the Arch of Triumph that will in fact go back to Palmyra. What we are seeing set up is a smaller model of it and not the full scale reproduction. The original production of it is 49 feet (15 meters) tall and weighs 11 tons or 22 thousand pounds. The Arch that they have for the traveling circus is only 25 feet (7.62 meters) tall and weighs in at 3,000 pounds or 1.5 tons. There is quite the difference in size from the real one that will be placed back in Palmyra and the traveling one.

So where is the real one now? Is it in Dubai? Are they waiting for Palmyra to be secured before they move it back and are they going to construct the temple of Bel? What if I told you they more than likely have the temple already built. I mentioned in one of my first papers on the Arch that this was their intention from the very beginning, to rebuild the entire ancient complex. And this is way they are doing. “Italians experts have already submitted to the Government of the United Arab the reduced-scale reproduction of the Palmyra temple.” I am showing you here that they have already made a smaller scale of the Temple of Bel by their own admission. I will post the full article and link below.

They will rebuild the ancient city and its ironic that this happens at the same time the Jews are pushing for their 3rd temple. I have said from day one that this ancient city of Palmyra will be the main hub (militarily and religiously) for the man of sin before he enters the glorious land and enters Jerusalem. We can already see it as a military complex as Russia has been there from day one trying to lay claim on it. And by the looks of it from the link below, TORART is preparing to give us a show on 3D printing. 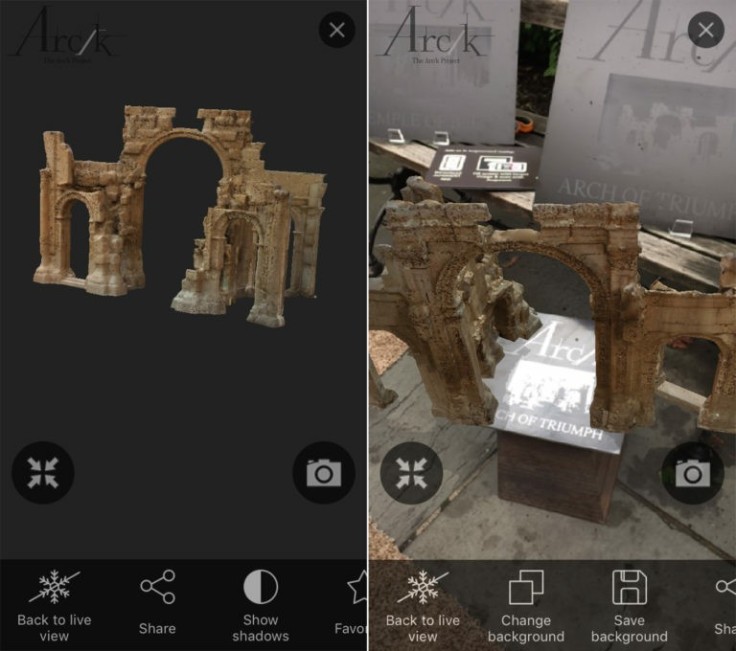 THE PROPOSAL TO ARAB EMIRATES

Palmira rises again in 3D thanks to Italy

The triumphal arch designed by robots of Nicola Di Turi

Palmira “rebuilt” in 3D thanks to an Italian company. The ancient Syrian city devastated by ISIS could rise thanks to technology developed by our country. Two Tuscan companies are working on making the arc of triumph of Palmyra, built nearly 2000 years ago, but pulverized by jihadists last October. TorArt, Carrara company specializing in sculpture and founded by Giacomo Filippo Massari with Tincolini, will build the arch in the archaeological site in Syria destroyed in partnership with D-Shape, a company founded by Enrico Dini lets (Pisa).

Presented in London on April 19

Italians experts have already submitted to the Government of the United Arab the reduced-scale reproduction of the Palmyra temple. Next stop, the reconstruction of the arc-scale triumph of Palmyra, which will be presented in London in Trafalgar Square on April 19. The goal, of course, remains that sooner or later to install the monument in Syria, where today remains a pile of rubble. The technique used to reconstruct the arch of Palmyra is 3D printing, exploited by D-Shape for sand and rock binding, printing blocks of raw marble and sandstone.

“Material from Carrara or from the Alps»

“The 70% of the material that we will use will come from Carrara or the Alps. The day that we will move to Syria, we will use local materials,” says the BBC Enrico Dini, engineer and founder of the company. For the demonstration in London, in fact, it will produce an arc by the small size, compared to the original to be installed in Syria. TorArt intervene at a later time, when it will be necessary to work and define the printed sand, in order to obtain the monument. “Our technique is subtractive, let’s take off to shape. The robots work together with our sculptors. There is no limit to what you can do and these days we are sculpting a life-size David, “says Giacomo Massari, founder of TorArt, who established his laboratory in the famous marble quarries of Carrara.

The triumphal arch of Palmyra made by the two Italian companies, will be 15 meters high and weighs 11 tons. To rebuild it will take approximately 70 cubic meters of sand, for a higher production equivalent to 100 thousand euro, to which must be added the cost of finishing, assembly and shipping. Each robot used by TorArt for finishing has a cost of about 300 thousand euro. “The will is to rebuild Palmira, but also the archaeological sites affected by natural disasters,” argues Giacomo Massari. From Pompeii at Sybaris, in Italy there would be spoiled for choice. Yet witness the process of defining the arc grooves, it means also return to themselves a bit ‘of that sense of beauty sorely tested by the reckless pickaxe terrorists. An essential contribution to the reconstruction of Palmyra arch arrived by the Institute for Digital Archeology at Oxford, a partner with the Government of the United Arab Emirates. The institute has distributed over 5000 cameras civilians and volunteers in the Middle East, to photograph monuments and sites at risk, rimpinguando the Million Image Database with thousands of photos. Useful to reproduce the works in 3D, but essential to give us back the hope, against iconoclastic wave with which ISIS wants to destroy the memory of our past. (http://www.corriere.it/cronache/16_marzo_30/palmira-risorge-3d-grazie-all-italia-f2fcc072-f640-11e5-b728-3bdfea23c73f.shtml?refresh_ce-cp)

“The Palmyra’s Arch developed by the two italian companies will be 15 meters tall and 11 tons heavy. To rebuild the Arch70 cubic meters of sand will be necessary, with an equivalent value of 100 thousand Euros. Each robot used by TorArt in this project has a 300 thousand Euros worth.

“Our will is to rebuild Palmyra but also the many archaeological sites destroyed by natural disaster” argued Giacomo Massari. A fundamental contribution in this project comes from the Institute for Digital Archaeology in Oxford, with the distribution, to civilian and volunteers in the Middle East, of more than 5 thousand photo cameras to take pictures to the monuments and sites in danger.

Maybe this project and the work of the two italian companies, is not just to rebuild Palmyra’s Arch, but to rebuild our feelings for beauty and art too, that were tested by the brutality of the terrorists.” (http://www.italiangoodnews.com/palmyras-arch-the-italian-reconstruction-3d-project/)

So essentially the Arch was going back home. Or should we say it’s its home away grim home. I suggest you go take a look at http://www.torat.com website to see what they are actually up to. It seems that they are more of a key player in this whole Arch agenda. You can see below in TORART’S post that they also recently recreated the decapitated head of Allat, the Sun goddess for the Italian Consulate in New York. They just aren’t in the business of making Arches and other statues but obviously have some sort of agenda that has Palmyra in mind. I mentioned this here.

Matter of fact, they have had intentions from day one to rebuild the ancient city of Palmyra in its entirety like I already mentione. And I’m not just talking about the Arch. My question now is what is Dubai’s role in all of this. We know they are probably funding this whole thing. But why do they want the Temple of Bel built and the Arch of Triumph. From the looks of it it looks like they were presented with the Temple of Bel first and then the Arch came shortly after. Does it have to do with that god they worship in Mecca? And I’m not talking about their “new” god Allah. I’m talking about that ancient god Hubal and Allat. Is this why they want the Temple of Bel built along with Palmyra in its entirety? Does it have anything to do with the Quaryish tribe and the Hashemites?

And I’m going to keep going over the differences between these three arches until people get it in their heads. 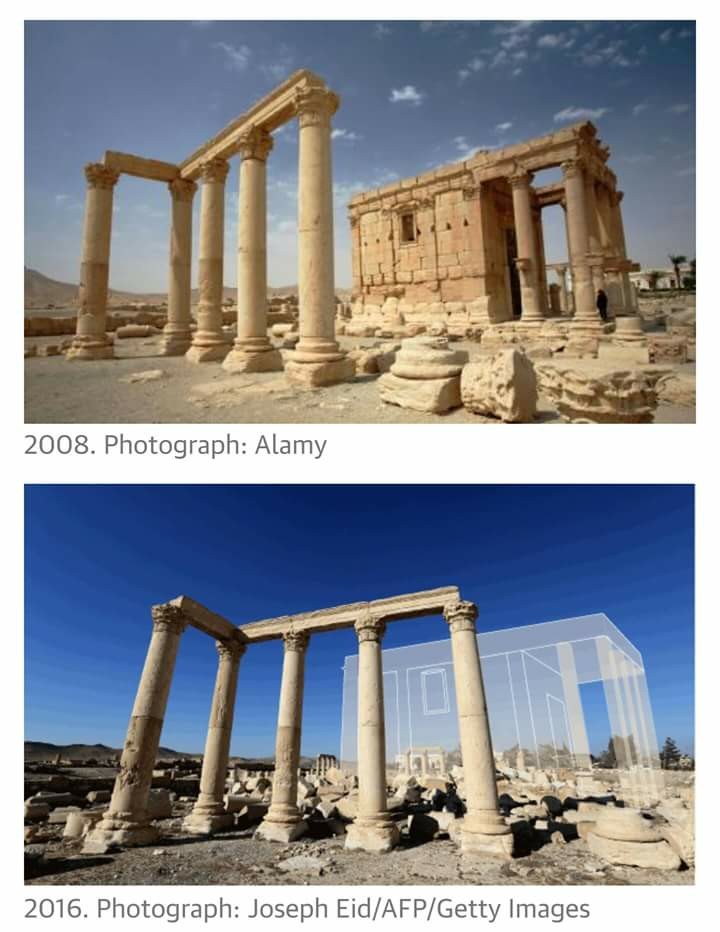 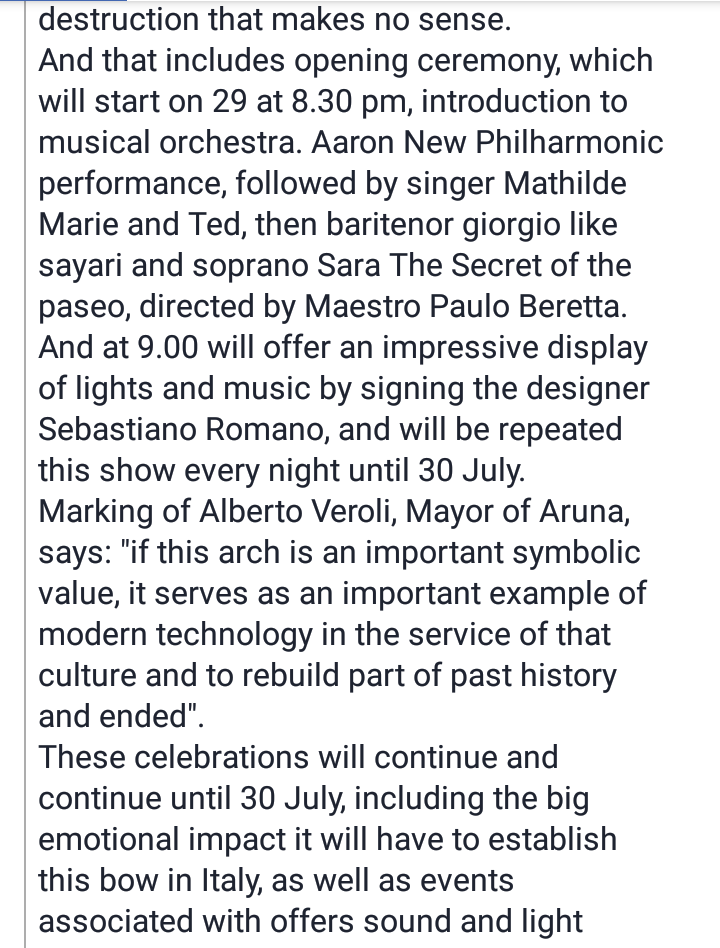