This is an excerpt from my book.

Have you ever heard the term “body of planets” or “heavenly bodies”? Why do they refer the planets or wandering starts as a body? This body of eight planets are Mercury, Venus, Earth, Mars, Jupiter, Saturn, Uranus and Neptune. Let’s take a look at what these planets represent. “The names for the planets in the Western world are derived from the naming practices of the Romans, which ultimately derive from those of the Greeks and the Babylonians. In ancient Greece, the two great luminaries the Sun and the Moon were called Helios and Selene; the farthest planet (Saturn) was called Phainon, the shiner; followed by Phaethon(Jupiter), “bright”; the red planet (Mars) was known as Pyroeis, the “fiery”; the brightest (Venus) was known as Phosphoros, the light bringer; and the fleeting final planet (Mercury) was called Stilbon, the gleamer. The Greeks also made each planet sacred to one among their pantheon of gods…When the Romans studied Greek astronomy, they gave the planets their own gods’ names: Mercurius (for Hermes), Venus (Aphrodite), Mars (Ares), Iuppiter (Zeus) and Saturnus (Cronus). When subsequent planets were discovered in the 18th and 19th centuries, the naming practice was retained with Neptūnus (Poseidon). Uranus is unique in that it is named for a Greek deity rather than his Roman counterpart…In traditional Hebrew astronomy, the seven traditional planets have (for the most part) descriptive names – the Sun is חמה Ḥammah or “the hot one,” the Moon is לבנה Levanah or “the white one,” Venus is כוכב נוגה Kokhav Nogah or “the bright planet,” Mercury is כוכב Kokhav or “the planet” (given its lack of distinguishing features), Mars is מאדים Ma’adim or “the red one,” and Saturn is שבתאי Shabbatai or “the resting one” (in reference to its slow movement compared to the other visible planets). The odd one out is Jupiter, called צדק Tzedeq or “justice.” Steiglitz suggests that this may be a euphemism for the original name of כוכב בעל Kokhav Ba’al or “Baal’s planet,” seen as idolatrous and euphemized in a similar manner to Ishboshethfrom II Samuel” (https://en.m.wikipedia.org/wiki/Planet) 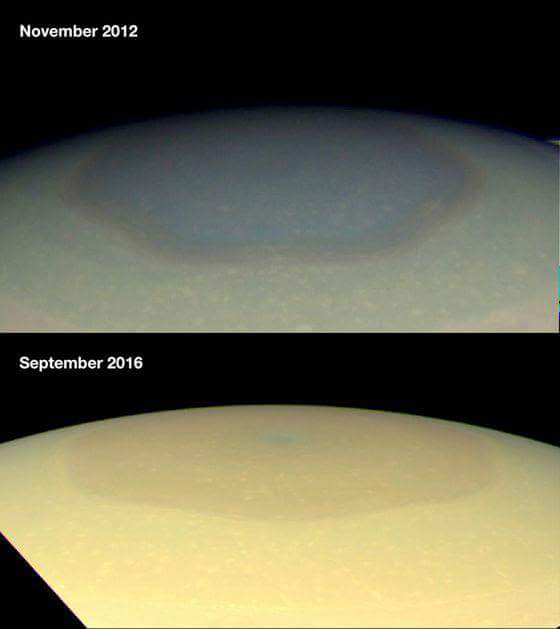 So these planets in different civilizations and cultures (Romans, Greek and Hebrew<~ not so much) are  represented as gods. Saturn was the furthest away from the sun so it was in fact trailing behind the rest of them. It is also called the black sun and is represented as Satan. Not only was it represented as Satan but also Osiris/Nimrod. “The Osirian mysteries, the wailing for Tammuz, all refer to the transformation of Saturn during and following the Deluge. Osiris was not a king but the planet Saturn, Kronos of the Greeks, Tammuz of the Babylonians. The Babylonians called Saturn “the Star of Tammuz.” (http://www.varchive.org/itb/satwor.htm) Some believed that Saturn not only represented Osiris himself but specifically his head. The head of Osiris is Saturn? Does his head in fact make up the body of these seven other planets as Jesus is the head of the church, the body? You also see the seven church’s representing completeness in Revelation. And not only that, remember that in Revelation their is a king who is the eighth that comes from the seven? Does this all coincide with the body of the seven planets with Saturn/Osiris/Nimrod as the head? Are we seeing this laid in the stars like the Gospel was laid out for Adam? 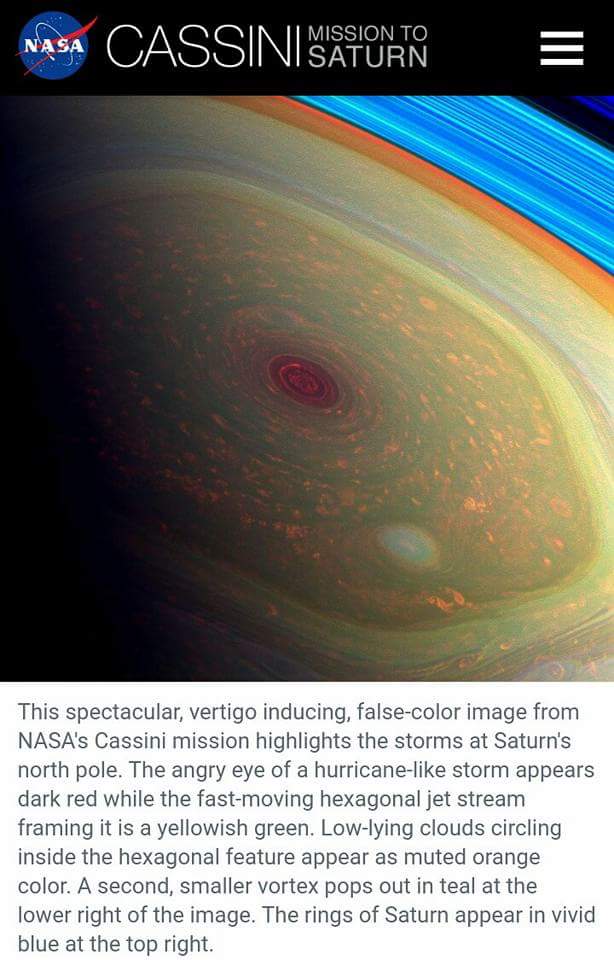 And what is interesting is that there was a article that came out where the North pole of Saturn (the sides of the North?) that is normally blue has now turned gold. (https://www.google.com/amp/www.dailymail.co.uk/sciencetech/article-3867924/amp/What-happening-giant-hexagon-Saturn-s-north-pole-Mystery-Nasa-images-area-changed-blue-gold-just-four-years.html) In Alchemy, Saturn was represented as lead and it seems symbolically they have turned lead into gold. This is the elixer of life, turning metals into gold. As far as this North pole of Saturn goes, NASA has declared it has a giant eye. Yeah one giant red eye looking back at them. (https://www.nasa.gov/jpl/cassini/pia18273) Now if Saturn is represented as the head of Osiris and Horus is Osiris resurrected then that would make the all seeing eye and the eye on the capstone that hovers over the pyramid (eye of Horus), Saturn. Am I right? So if the Freemasons are waiting to put the capstone on the pyramid, they are in fact waiting for Saturn/Osiris to come back. Makes sense to me.

Now since we are taking about Saturn being the head of this body of seven planets, I want to show you a few comments of what NASA says about the Cassini mission to Saturn. Notice the phrasing and wording they use to describe it. “Saturn may be known for its rings, but the planet itself offers irresistible and inexhaustible subjects for study. With more than 700 times the volume of Earth, Saturn is a behemoth.” We all know by now that Saturn has rings. In our modern day, rings signify a covenant in marriage and Saturn could be called Lord of the Rings. Lord is Baal in Hebrew. So we have Baal of the rings. Now notice they use the number 700 to describe how big it is compared to Earth. Remember, 7 represents completeness. They didn’t use 600 or 800 but chose 700 for a reason. Then they call Saturn a behemoth. The Behemoth was a massive land animal known for its size and strength. Job mentions this Behemoth in chapter 39. This is the beast of the land and I see this as a type of man of sin. Remember, Saturn is represented as Osiris head. Their king.

“A Royal Crown for a Regal Planet – As different as Saturn is from Earth, the two planets have some similarities, one of which is the presence of jet streams. Saturn’s most famous and most visible jet stream, however, is far different from those of Earth. It’s called the hexagon.” NASA calls this hexagon on the North pole a royal crown. The six sided star of Remphan who represents Saturn. Let me also point out, that Saturn’s South pole doesn’t have any of this. Its only on the sides of the North (Isaiah reference). It’s all too interesting and makes you think. Lets see what else they say though.

“Saturn’s global and inhospitable abyss might never completely reveal itself to humans, but during Cassini’s lengthy stay, Saturn has shared some of its strange secrets and magnificent spectacles.” This abyss they are referring to is the hexagon with the red eye in the center of it. Why in the world would they use the term abyss? Don’t they know what Revelation says about this abyss and that they have a king over it named Apollo or Abbadon? And don’t they know Apollo is another name for Nimrod/Osiris?! Yes they do, that’s why they say what they say. You can find this article at NASA here : (https://saturn.jpl.nasa.gov/science/saturn/)

I also want to bring up that this ongoing cassini to Saturn project will end soon. “After almost 20 years in space, the Cassini mission will end on September 15, 2017 at 5:07 a.m. PDT (8:07 a.m. EDT). Here’s how it will happen: In late 2016, the Cassini spacecraft will begin a completely new type of mission at Saturn. During its final months, the intrepid spacecraft’s orbit will carry it high above the planet’s north pole and then send it plunging between the planet and the innermost edge of its dazzling rings. Beginning on Nov. 30, 2016, Cassini will repeatedly climb high above Saturn’s north pole, then plunge to a point just outside the narrow F ring (the edge of the main rings), completing 20 such orbits. Then, on April 22, 2017, Cassini will leap over the rings to begin its final series of daring dives between the planet and the inner edge of the rings. This is the Cassini “Grand Finale.” After 22 of these orbits, each taking six days to complete, the spacecraft, will plunge into the upper atmosphere of the gas giant planet, where it will burn up like a meteor, ending the epic mission to the Saturn system.

As it plunges past Saturn during the Grand Finale, Cassini will collect some incredibly rich and valuable information that the mission’s original planners might never have imagined:

The spacecraft will make detailed maps of Saturn’s gravity and magnetic fields, revealing how the planet is arranged on the inside, and possibly helping to solve the irksome mystery of just how fast the interior is rotating. It will vastly improve our knowledge of how much material is in the rings, bringing us closer to understanding their origins.Cassini’s particle detectors will sample icy ring particles being funneled into the atmosphere by Saturn’s magnetic field. Its cameras will take amazing, ultra-close images of Saturn’s rings and clouds.This computer-generated view shows the view from the perspective of the Cassini spacecraft as it dives between the rings and Saturn’s cloud tops.

No other mission has ever explored this unique region so close to the planet. What we learn from these activities will help to improve our understanding of how giant planets – and families of planets everywhere – form and evolve. And at the end of its final orbit, as it falls into Saturn’s atmosphere, Cassini completes its 20-year mission by ensuring the biologically interesting worlds Enceladus and Titan could never be contaminated by hardy microbes that might have stowed away and survived the journey intact. It’s inspiring, adventurous and romantic – a fitting end to this thrilling story of discovery.” (https://saturn.jpl.nasa.gov/mission/grand-finale/overview/)

So notice that the grand finale starts on April 22nd. This is during Passover. It’s almost like they are doing this symbolic sacrifice where they will plunge into Saturn. And the strange thing is this, its completely finished on Saturday (Sabbath) September 15th. The interesting thing about this date is that it’s a week before some believe the sign of Rev. 12 happens in the stars. I do believe this happened with the birth of Jesus but I do also believe that this is a false sign that is connected to the man of sin. Now it may be connected to Saturn. Not to mention, Saturn at this time will still be in the left knee of Ophiuchus, the restrainer. Then He is released. So you have the two important dates of Passover and Rosh Hashanah. The biblical name for this holiday is Yom Teruah (יוֹם תְּרוּעָה), literally “day [of] shouting/blasting”, sometimes translated as the Feast of Trumpets. So there you have it. Cassini will sacrifice itself into Saturn during this time. This to me looks like a ritual in the highest degree. And I wonder if this stopping of the mission on Sept 15 means that there is a rebirth that is associated with Rev 12? I want to also point out that this is 5 months apart at 147 days. This is 6 days short of 153. Those who had read my paper on The Vinegar and the Sword know exactly what I’m referring to.