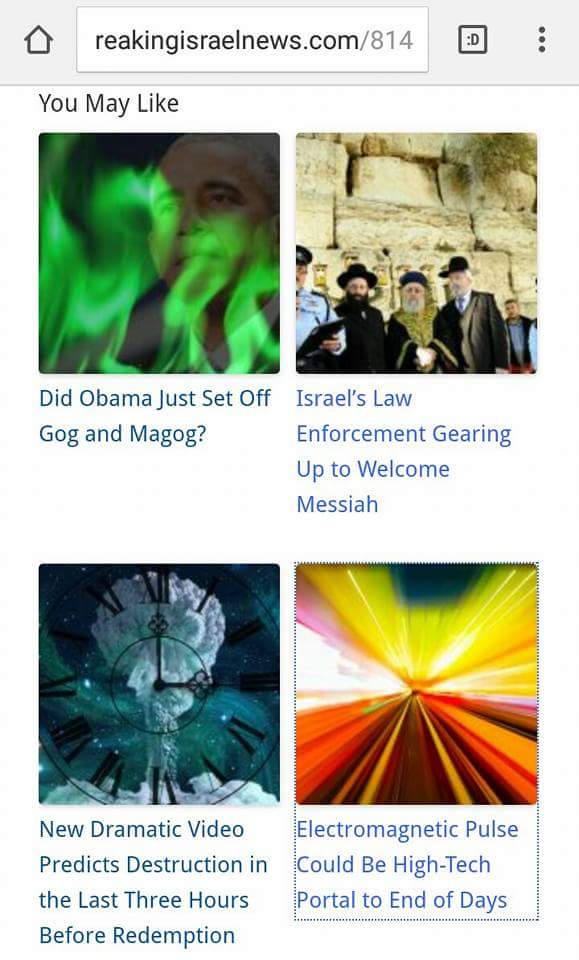 I had seen an interesting headline from Breaking Israel News dot com that read “Electromagnetic Pulse Could Be High-Tech Portal to End of Days” (https://www.google.com/amp/s/www.breakingisraelnews.com/80072/electromagnetic-pulse-high-tech-portal-end-days/amp/?client=ms-android-metropcs-us). The article was about EMP’s and the damage they can cause. But this headline got me thinking. Can an EMP open a portal? We have already been over before that a Pulse is a vibration/energy and how there is what is called the Saturn vibration/energy/pulse. Most of you know that the Jewish year 5776 is the proclaimed year of pulse the UN (http://iyp2016.org/). We have now entered the Year of Oz (Ohz) in 5777 (https://www.linkedin.com/pulse/5777-year-oz-rabbi-davis). This is the time we are in now. It makes perfect sense knowing what we know about the false sign of Rev 12 and the rebirth of Saturn through the King planet Jupiter. And we know what CERN is doing in regards to opening a portal that’s associated to Saturn.

So here is my thought on these EMP’s. Are these Electromagnetic Pulses capable of opening a portal with its vibration/energy that it produces? Most people know that an EMP can be man made or caused by the Sun. But can they be caused by say, Jupiter or Saturn? In a study by A. Luque that was published online 30 OCT 2014 called “Coupling between atmospheric layers in gaseous giantplanets due to lightning-generatedelectromagnetic pulses”. In the Abstract it says this. “Atmospheric electricity has been detected in all gaseous giants of our solar system and is

therefore likely present also in extrasolar planets. Building upon measurements from Saturn and Jupiter, weinvestigate how the electromagnetic pulse emitted by a lightning stroke affects upper layers of a gaseous giant. This effect is probably significantly stronger than that on Earth. We find that electrically active stormsmay create a localized but long-lasting layer of enhanced ionization of up to 103 cm−3 free electrons belowthe ionosphere, thus extending the ionosphere downward. We also estimate that the electromagnetic pulsetransports 107 J to 1010 J toward the ionosphere. There emissions of light of up to 108 J would create atransient luminous event analogous to a terrestrial “elve.” In this work we focus on Jupiter and Saturn, the two planets with the most abundant lightning observations.In each of them we investigate the atmospheric propagation and the local impact of a lightning-generated electromagnetic pulse.” (https://drive.google.com/file/d/0BwuUBwTrZu4qdURqWFhNQVRMRWs/view?usp=drivesdk)

Interesting they say it “would create atransient luminous event analogous to a terrestrial “elve”.” We all know what elves really are right? Demons. But that’s not what he means by terrestrial elve. “Light phenomena called “Elves”, with a much shorter duration than sprites (<1 ms), are located between 80 and 95 km of altitude with a much greater lateral extension (up to 600 km). They are produced by the heating, ionization and optical emission effects associated with the EMP pulses radiated by the flashes of the two polarities.” (http://www.sciencedirect.com/science/article/pii/S1631070502014184) It is a light phenomenon that is associated with EMP pulses.

So these celestial EMP’s are caused by lightning storms from Jupiter and Saturn if I’m reading that right and they cause terrestrial elves. I don’t know enough to even begin to tell what some of this other info means. I do know this… that these planets will put off a pulse/vibration in the future sometime that will cause havoc on the earth. Is this part of the plan? An EMP that takes out the grids across the earth the same time Satan inhabits this man of sin? Remember who Jesus said he saw fall as lightning? Satan that’s who. So I wonder if these terrestrial elves have ever been seen by someone before that be caused some sort of EMP here? Well check this out.

On October 1st just before midnight (Oct 2nd was Rosh Hashana, Jewish New Year 5777, year of the pulse) in Texas a witness saw a mysterious light in the sky and recorded it on his cell phone. “The witness was attending a birthday party at a friend’s house when, at about 11 p.m., a strange light appeared in the sky. It was only very faintly visible at first, but it increased in brightness, gaining an orange color. Within seconds, the light was shining brightly in the sky over the city. No one had an idea what the mysterious light phenomenon over the city was, but everyone could see that it looked like an elongated bright orange slit that dimmed and brightened in cycles. As the strange light dimmed and brightened, the witness pulled out his phone to film it…The footage was apparently taken using a phone not designed for capturing clear footage in the dark. But according to the witness, the mysterious slit of light looked like “some sort of portal.”

The intensity of the light after it appeared in the sky increased. It became so bright that it was nearly as bright as the Sun at sunset, according to the witness. And because it was late in the night, approaching midnight, the witness was certain that he had not mistaken the Sun for a mysterious streak of light. It was nearly midnight and pitch dark at the time the light first appeared in the sky. The bizarre sighting lasted about 10 minutes, during which the mysterious streak of orange light remained stationary in the sky, never moving from its position. It waxed and waned repeatedly before fading away. There was pitch darkness once again after it had faded away, with nothing left to show that a bright streak of light had shone in the sky moments before.

While the light shone over Bridge City, a strange incident unfolded at a place only about 15 minutes away from the place in Bridge City where the strange light was seen. According to Secureteam10’s Tyler Glockner, a woman in Port Arthur reported that while driving home at about the time the light appeared in the sky, she and hundreds of other motorists encountered a strange phenomenon that Glockner claims gives a vital clue about the nature of the strange streak of light over Bridge City. The woman, identified as Rhonda, said that as she drove along, a strange wavelike phenomenon appeared and began shutting down electronic devices and power sources in her car. She heard an unfamiliar high-pitched noise from her radio before it stopped working.

Her car lights also dimmed and her car engine stalled. She noticed that several other drivers were having similar trouble with their cars. Many were forced to break and stop their cars hurriedly and pull over. Cars went out of control and swerved dangerously on the road as drivers struggled to avoid crashing into oncoming cars. “Now that seems to me like an EMP (electromagnetic) wave, something like that,” commented Secureteam10’s Tyler Glockner. “Something was knocking out power systems along this area very close to where the mysterious streak of light was sighted.” An electromagnetic pulse (EMP) is a burst of electromagnetic waves originating from a natural or artificial source. It causes EMP interference that could disrupt or damage electronic equipment. A powerful burst of high-energy EMP from a nuclear or non-nuclear weapon can cause serious damage to structures.” (https://www.google.com/amp/www.inquisitr.com/3561601/mysterious-interdimensional-portal-opens-over-bridge-city-texas-sparks-traffic-chaos-after-generating-emp-waves-that-shut-down-moving-vehicles-video/amp/?client=ms-android-metropcs-us)

So what do you think? Was this caused by a planet or was it man made? In the video below they believe its from a “UFO” craft of some sort. I don’t believe that. I think it was associated with the year of the pulse. Remember, in Israel the new year was to start at sundown that day and our calendar has it starting after midnight. Was this a sign that was bringing in the year of the pulse to an end? And like I mentioned before, will this ultimate vibration/pulse in the future happen when Satan is released from the abyss to indwell the man of sin which will cause world chaos on all electrical grids? Is this the final Arch/portal to be opened? Something to think about…

Here is the video: https://youtu.be/RSej4lrFnA4

And look at the logo below. It is from the Pulse gay night club shooting in Florida. Notice when it’s turned on its side it becomes an arch or gate or portal. Pulse=portal. And don’t forget, at this time was when the Arch of Triumph hysteria was going on. 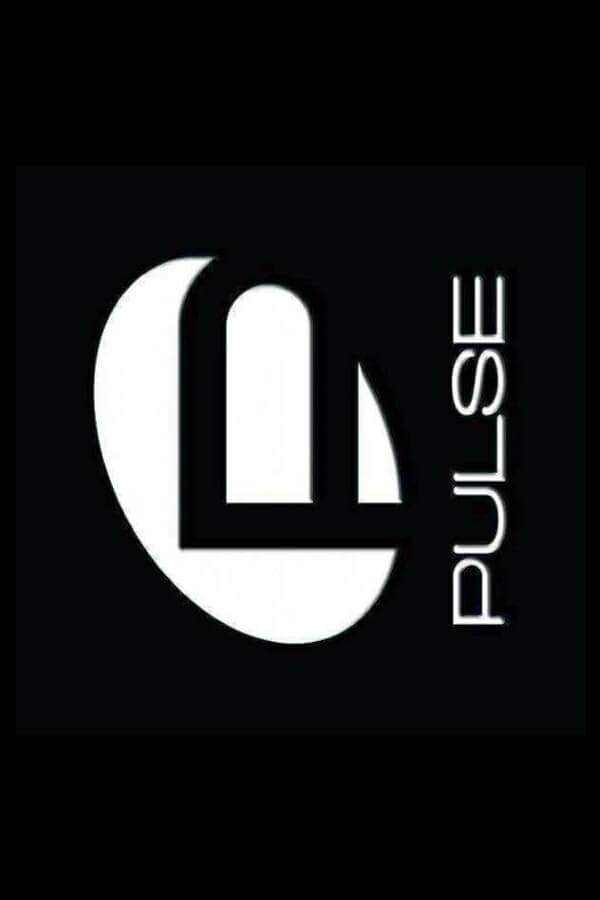